Massively underrated Swedish thrash/straight-ahead metallers KAYSER have signed with Listenable Records. The band has just completed work on their Listenable debut, entitled Read Your Enemy. The album is set for release in early 2014. The band is currently working with Sinemax Productions on a video for as-of-yet-unnamed track. More details to come.

KAYSER saw the first ray of light in early June 2004 when Spice (ex-SPIRITUAL BEGGARS), Mattias Svensson (THE DEFACED), Bob Ruben (ex-THE MUSHROOM RIVER BAND) and Fredrik Finnander decided to join forces to create a pure metal band. The band’s sound is fully immersed in true original heavy / thrash metal genre with emphasis on the muscular songwriting: hammering blistering and catchy riffs one after another, delivering the goods through scorching witty arrangements with fluid virtuosity. Focus always lies on the song, easily identifiable through the supreme vocals by Spice, though the emotional and musical expressions stretch from heavy introvert pounding to pure hate driven ferocity.

“No boundaries and no limits… and that goes for everything,” the members stated initially to set the aim straight. As for comparisons, it might be best described as a mutation of BLACK SABBATH/MEGADETH/SLAYER with dips from different good bowls of classic and modern metal.” 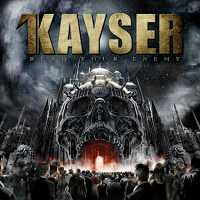