GWAR: Dave Brockie Memorial Art Show To Be Held In May 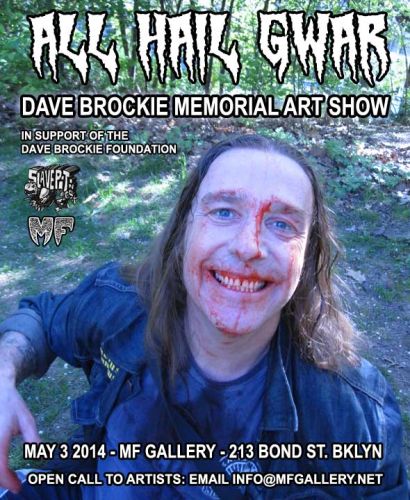 On Saturday May 3rd, MF Gallery is having a special memorial art show dedicated to Dave Brockie, a.k.a. Oderus Urungus of the band GWAR, who passed away suddenly in March 2014. Part of the proceeds from the show will benefit the Dave Brockie Foundation.

Dave was prolific in many different visual mediums and he collaborated often with MF Gallery; from his solo show / performance in 2004 to GWAR’s Crack-a-Thon in 2010 and 2011 and numerous group shows throughout the years.

Artists, fans and friends of GWAR are invited to come see the art show and celebrate this great man’s life with MF Gallery at the Opening Party, on Saturday May 3rd from 7 – 10 PM. Music by GWAR, DEATH PIGGY and DBX will be playing all night, and there will be projections of various GWAR / Dave Brockie videos. Admission is free and open to all ages.