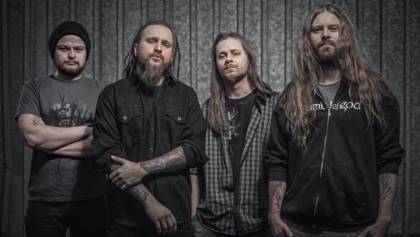 On March 10, Polish tech death masters DECAPITATED entered Hertz Studio in Bialystok, Poland to begin recording their sixth album. The as-yet-untitled CD is set for a release in September via Nuclear Blast.

“All you know that we’ve been quite busy lately. We had some personal changes in the band and also we did I guess the best tours we had; with MESHUGGAH, LAMB OF GOD and CHILDREN OF BODOM. First of all, we want to introduce you DECAPITATED new drummer Michal Lysejko. Some of you had a chance to meet him already during tour with LAMB OF GOD this January.

“Also I want to say THANK YOU to the rest of the people who took a challenge and sent their video for an audition. Also, since January this year, we signed worldwide management contract with Continental Concerts & Management. That’s for sure big step and opportunity for us and big challenge.

“But I guess the most important news for most of you is that after almost nine years we back to Hertz Studio (albums: Nihility, The Negation, Organic Hallucinosis) to record new album which will be released autumn this year. We will inform you about details soon.”

DECAPITATED’s last album, Carnival Is Forever, was released in 2011 via Nuclear Blast Records.