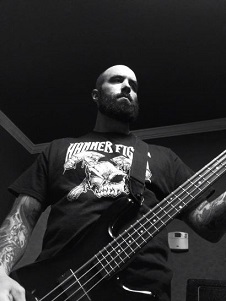 Less than a month after New Orleans’ sludge and doom metal pioneers CROWBAR – led by vocalist/guitarist Kirk Windstein (who also plays in DOWN) – announced the departure of bassist Pat Bruders, his successor has been named.

“After 100s of bass video submissions and many jam sessions, we have decided that Jeff Golden (pictured) is the man!” Thirty-two years old, Jeff is from Bolton, Connecticut, but currently resides in Estero, Florida.

CROWBAR will enter the studio in December to begin recording their new album.