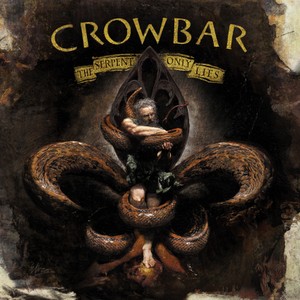 When it comes to bringing the heavy, Crowbar have always been leading the charge. That sludge-y, thick guitar tone is almost instantly recognizable at this point in the game and their influence is revered. The Serpent Only Lies is their eleventh album to date, and like many bands lucky enough to make it this far, the old adage applies – if it ain’t broke, don’t fix it.

Of course, that’s a simplistic view of what Crowbar have done with their latest effort. Kirk Windstein himself stated that the band was trying to recapture a fresh version of some of their more classic works, and to that end, it succeeds whole-heartedly. Galloping, thunderous tracks like “I Am the Storm” and the title track propel forward with heaviness and slick grooves that are easy to latch onto with even the first listen, with the latter switching into some solid cleans and melody later on. The chorus of “The Enemy Beside You” features a riff so monolithic it will peal back paint as it comes to a mountainous crawl. Melodic vocals also serve to switch the mood, with the doomy dirges like “Embrace the Light” and “Song of the Dunes” providing some balance and contrast – being heavy for heavy’s sake can only get one so far. Crowbar take these melodies in stride, with “Surviving the Abyss” being a case where the heaviness and emotive can still come together to make the best of both worlds.

No one was coming into The Serpent Only Lies and expecting Crowbar to alter their formula by any sort of drastic measure. Slow and heavy has always won the race for this act, and albums like these are a solid reminder of why Crowbar is one of the best in the business when it comes to this formula. Just as enticing as their strongest material, and a worthy successor to Symmetry in Black.