Týr – Getting Laid On Legend Land 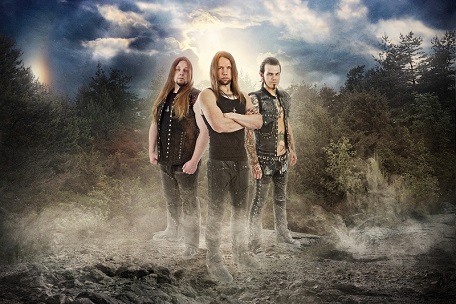 For most, the introduction to Týr came via 2006’s triumphant and heroic Ragnarok, an instant classic that didn’t necessarily take the epic/folk metal world by storm, but served as a big “HELLO” to the international metal community. Reason being, the band calls the Faroe Islands home, a small body of land off the coast of Norway with a population of roughly 50,000, one that is still an unknown quantity across the globe…and to metalheads. Even with the small size and obscurity of their country, Týr ’s dreams were big. “I personally had the goal to become an internationally successful musician,” begins guitarist/vocalist/founding member Heri Joensen. “I was never satisfied with just putting out some albums or local concerts. I want to reach the top, come hell or high water!”

Via Ragnarok, as well as subsequent albums such as Land, By the Light of the Northern Star, and The Lay of Thyrm established Týr as a unique entity into the epic metal realm. Joensen’s vocals are the starting a point, a magnificent Euro cross of Freddie Mercury and Borknagar’s ICS Vortex, becoming the straw that stirs the mead, while triumphant, yet agile melodies rain down from the sky. Point being, Týr can be epic without having to resort to unnecessary instrumentation or over-used themes. According to Joesen, it all started with their sophomore album, 2003’s Eric the Red.

“Eric the Red was an important album for us, I have to admit. It was our first time with [producer] Jacob Hansen, and we’ve stuck with him ever since. Also it was the album that established our style, much more than our debut album. But thinking back we had no clue of any of this. Recording the album felt, to me at least, that I didn’t have a clue what the fuck we were doing.”

Their new Valkyrie effort is the first release for king-sized Metal Blade Records, and also features the considerable talents of Nile drummer George Kollias, who stepped in for a departed Kári Streymoy. “George’s drumming is absolutely incredible, but for this album he kept it at a very appropriate level. I must say he is a very tasteful musician, and he found the brilliant middle ground between what our other albums have sounded like and what he’s capable of. He worked very fast and efficiently, and he is a very nice and down-to-earth guy. It was a pleasure to work with him.”

The drummer spot for the present time, though, remains fluid, with Finnish drummer Valtteri Varynen filling in for a brief moment of time in the summer. Amon Djurhuus has since joined the fold on a temporary basis.

The concept of Valkyrie is about an “anonymous Viking age warrior who leaves his woman and goes off to impress the Valkyrie on the battlefield so that she may bring him to Valhalla, or to Fólkvangr, the home of Freyja — the goddess associated with love, sexuality, beauty, fertility, gold, sorcery, war, and death.” When asked why the band chose to do a concept album, Joensen was elusive. “I’m not sure. It could have been personal experience coupled with some realizations about humanity as a whole. That plus a fascination with the Nordic mythology…and boobs.”

Boobs aside, the album also features a guest spot from Leaves’ Eyes siren Liv Kristine, who lends her soft, subtle voice to “The Lay of Our Love.” “At Wacken Open Air one year ago I had a guest performance with Leaves’ Eyes, Liv’s band” tells Joensen. “She most graciously offered to do some guest vocals on our next album in return. We talked about it in the band and immediately decided it was a great idea. I’ve wanted to do something like this for some time now, and it was very good to finally get it done.”

No strangers to North America, the reminder of 2013 and early portions of 2014 appear to have plenty on the plate for Týr. Joensen said those holding it down in the 50 states should be prepared for the band to make yet another voyage across the ocean. “We’re currently on tour in Europe with Finntroll. That’s going to last another four weeks. Then we have a show in Israel, the first Folk Fest, and that’s it for this year. Then, as I said, we’re off to the U.S. and Canada. After that, there’s the festivals and then more touring. I think all of next year is pretty full booked already. But all will be announced as we get confirmation, so stay tuned.”