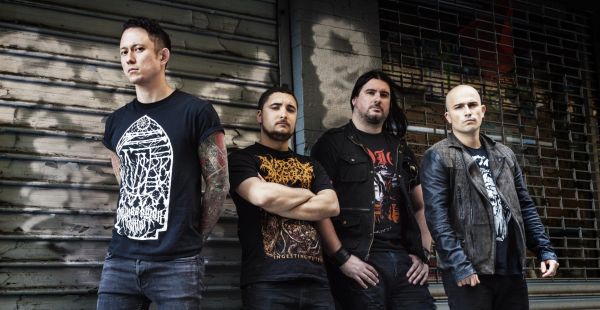 Hot off the heels of The Sin and The Sentence, arguably the band’s strongest release in quite some time, Trivium have been out on the road consistently since last October. Tours with Arch Enemy, Bullet for My Valentine, and most recently Fit for an Autopsy, have seen the band moving around North America quite a bit, and with different types of touring partners (that’s not even counting an early 2018 European run). The band is making every effort to ensure that the masses are getting their fill of the new material.

What’s equally interesting about Trivium is how they don’t shy away from taking bands out that they want to help push. Finding bands that aren’t necessarily the type that sound ‘exactly like them,’ but instead are something that they enjoy and think that fans will dig as well. There’s a sense of nurturing for the metal scene and getting the younger bands a place. Before the band’s gig in Poughkeepsie, NY, we grabbed bassist Paolo Gregoletto to discuss both of these things, as well as anniversary tours and the state of metal in 2018.

Dead Rhetoric: You’ve been on the road constantly since The Sin and The Sentence came out. How’s it been going?

Paolo Gregoletto: It’s been good. The shows have been selling out or close to it almost every day. I think that means we are striking while the iron is hot. The reactions have been great.

Dead Rhetoric: What are the ups and downs of being on the road so frequently?

Gregoletto: The ones that I think most people would probably figure, like being away from your family. It’s always tough, but I feel like the reactions that we have been getting, the reception to the record, the shows – it’s made being away not as bad as it would be if we were just kind of out and no one was coming to see us. It balances out. We know that we are building up something good with the band. That’s kind of what has kept us going all these years.

Dead Rhetoric: What have you learned from live experiences over the years?

Gregoletto: I feel like just learning that it’s good to get off the bus. It’s good to go around the towns/cities and take in your surroundings. Learn a little bit more about the world rather than staying in the venue. That’s probably the biggest thing.

Dead Rhetoric: Are there any places that you’d like to play that you haven’t been able to?

Gregoletto: Yeah – we have been lucky to play a lot of places. But there’s places in Asia we haven’t been to yet. We’ve been to South Africa, and I’d love to go back. Any place that can have a show, I’d love to go to.

Dead Rhetoric: Are you a band that can contemplate writing while on the road, or do you prefer to write elsewhere?

Gregoletto: I usually write off tour. I feel like every one of us has moved to that. We use the time between tours to sort of maybe mess around with riffs and ideas, and we eventually come back together and write music together and get in the jam room. That’s usually how it goes. I feel like we were getting burnt out trying to write while on tour and playing shows. It was too much.

Dead Rhetoric: With 8 albums in now, how do you organize a setlist each time?

Gregoletto: We sort of start with what new songs we are going to play, and then we kind of pick from our old songs. Like, “Ok, we are going to play these songs because people are going to want to hear them.” Then we round it out with some more obscure stuff that we want to play or something that we feel that the fans would like, or haven’t heard live yet. That’s our goal for the tour in the fall with Avatar and Light the Torch. Playing some stuff that we haven’t played before, with both old and new songs.

Dead Rhetoric: With the variety of bands you tour with, do you gauge it to the type of bands that you are out with?

Gregoletto: When it’s a headliner, we don’t think about it as much. We also realized that we are doing what we do best – we might add in a few songs that are different here and there, but I feel that we don’t change the set with that in mind. It’s more like what we want to play – what is the goal of the tour? That’s how we approach the setlist now.

Dead Rhetoric: Would you ever consider touring in support of the anniversary of an album? Which album do you think would work for something like that?

Gregoletto: We aren’t doing any 10th anniversary tours for any of the records. It is going to be the 10th anniversary of Shogun in October, so we talked about maybe playing a song we hadn’t played live before from the record, and maybe putting in a few extra songs to the set. Make it more Shogun-heavy. It wouldn’t be the majority but we’ll play a few songs from that record. Sort of our way of celebrating the anniversary.

Maybe when we get to the 15th or 20th anniversary – I feel like Ascendancy might be one. I could definitely see Shogun. We are a bit away from the other ones after that. We will see when it rolls around. You have to see how people view the record at that point. We are so focused on doing new stuff that stopping for a 10th anniversary, that for us, we would have to do that for a few albums and it would have put the new stuff off for too long.

Dead Rhetoric: You’d rather focus on what you are doing now than look back.

Gregoletto: Yeah, but we can still play a lot of songs from all those records so we get the best of both worlds.

Dead Rhetoric: How important is the relationship between yourself, Matt [Heafy], and Corey [Beulieu] when it comes to Trivium?

Gregoletto: It’s extremely important. I feel like it has only gotten stronger since it became the three of us being the main members. Having to make sure that the band stayed afloat and the band continued and grew – it has been very important. For us, with finding the right fourth member – taking time and not settling was a big thing for us.

Dead Rhetoric: What do you feel keeps Trivium relevant, and a driving force? I can think of other bands that came out around the same time but they just sort of fizzled away. What’s different for Trivium?

Gregoletto: I think we have had really great management. We’ve had a great relationship with our label. Those two things are very important in terms of having consistent ideas and plans in place. I think not being afraid to go out and try some different touring and getting in front of new people – always know that growth is the main factor for the band. Without growth, you aren’t going to be bringing in new fans. Don’t rely too much on nostalgia. We push ourselves. In the studio, that means taking some chances sometimes and I think now we have found a good spot for ourselves. Especially with the new record, I think getting Alex [Bent] into the band was a great new starting point for us.

Dead Rhetoric: Trivium is good about taking out newer bands. What do you learn from younger bands and bringing them on tour with you?

Gregoletto: I feel like I am always trying to listen to new stuff to not only stay in touch with what’s happening, but also find inspiration. I feel inspired just hearing new bands in general. When you discover bands when you are younger, you got that feeling of excitement of something new. It’s not necessarily using it to give ourselves a template of what’s new, but it makes you think about what you are doing differently sometimes. It always inspires you to keep stepping it up and bringing the fire, so to speak.

Dead Rhetoric: So what are some of the bands you’ve been checking out lately?

Gregoletto: The stuff off the top of my head…I really like that new band Vein a lot. I like their new record a lot, it’s really cool. The new Skeletonwitch is really cool – it’s a little different. There’s a lot of new bands. Jesus Piece is really cool. Cabal is another. Actually on the Trivium Spotify, there’s a mixtape, and it’s pretty much all the stuff we listen to if people want to check it out. We’ve been updating it every tour. We might switch to doing it every month, and throw in some Trivium tracks that people may not have heard. We have so many songs, it’s good to remind people.

Dead Rhetoric: Right, and it seems those playlists have become pretty important in just getting music out there.

Gregoletto: Yeah, I don’t know what we are going to do or what the goal of it is yet. But I like the goal of steering our fans towards some newer stuff. If you are interested in what we are listening to, here’s a place to find it.

Gregoletto: I think metal is the sum of many parts. There’s a lot of genres and a lot of subgenres. There’s a lot of bands doing a lot of cool stuff. It’s really hard to gain critical mass for bands, that’s a big problem. There’s no real Ozzfest/Mayhem Festival at this point, which was a good launching ground for bands. I think the underground has consistently always been in a good spot. When you are writing more extreme stuff, you are writing it because you want to. There’s no mindset that it’s going to be playing in arenas. The music has always stayed pure and good. It ebbs and flows. I think it’s much better than where rock is at, but I’m biased because I think metal is better. But there’s a lot of good stuff, you just have to look.

I think it’s really important for bands who have a lot of people’s attention, like us, we are lucky that we can capture a lot attention at one time, to say, “Hey, look at what we are doing, and there’s also other cool bands. You might see them on tour with us – like the bands we have out with us now. Or if not, we are always sharing stuff and talking about bands.” I feel like we are trying to do our part and bring up some other people with us if we can.

Dead Rhetoric: There’s obviously more touring in the works [Avatar/Light the Torch in the fall] – what concrete plans are there outside of that?

Gregoletto: Past that, nothing yet. We have some things on the horizon for next year that we are thinking about. It comes to scheduling and timing and things like that. We are in a good spot that we don’t have to rush out on tour right away. We are going to try to do whatever feels right to us and make sure that we are eventually thinking about something new at some point. 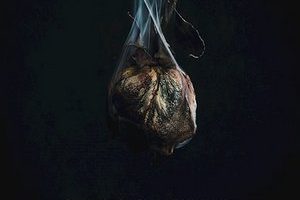 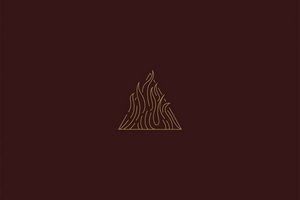