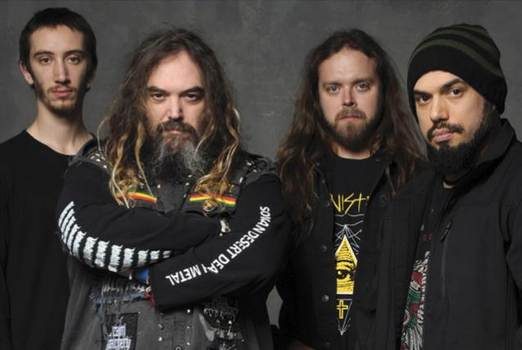 Max Cavalera has flown the flag for heavy metal in many forms since the 1980’s. His discography is vast and wide in all forms of extreme metal from thrash to death, industrial to metalcore, groove to tribal – with shades of color in between. No one can dispute his passion and commitment to the cause – touring globally and bringing his music to the stages of all the continents he can travel to, whether it’s small, intimate clubs or the sea of people at festivals for the hundreds of thousands. We all have our pinnacle moments live or on record if you’ve followed this musician long enough (check Beneath the Remains, Arise, and the subsequent mini-arena run Sepultura made with Helmet and Ministry for this scribe), and rest assured the latest Soulfly record Ritual will be a welcome return for many to his early thrash/groove roots for the group.

Featuring a mix of faster, balls out tracks like “Dead Behind the Eyes” and “Evil Empowered” against the proper groove/tribal feel of “Under Rapture” and “Bite the Bullet”, it’s like Soulfly propels forward launching aural heaviness that takes away the pain while offering a healthy release for any frustration, agitation, and worry weighing you down. Making the rounds in anticipation of the album’s release, Max engaged in the background behind the record, the guest appearances with Ross Dolan of Immolation and Randy Blythe of Lamb of God, his thoughts on the global metal community, and of course what’s on the horizon for this lifer of metal.

Dead Rhetoric: Ritual is the newest Soulfly album. It seems as if you dug deeper into a mix of your thrash roots with a bit of the expected groove metal style you’ve developed with this band. How do you assess your outlook on this set of songs and recording compared to previous Soulfly output?

Max Cavalera: Yeah, I think Ritual to me is more of a complete, true Soulfly record. Some of the other ones are a bit more experimental, especially Archangel was more of an experimental kind of thing. I think Ritual takes pieces from the origins of Soulfly with the groove and the tribal stuff mixed with my passion for the heavy stuff, extreme metal, death metal, thrash metal, hardcore or all the other stuff I listen to. It was a cool record to do with Josh Wilbur, as he was pulling for more of the groovy things and I was pulling for more of the extreme songs. The combination of that gave birth to something quite cool with Ritual. The record has a lot of different (styles), all the way through. From tribal songs, groove songs, thrash songs, and ending with a Motörhead kind of song as a tribute, which is “Feedback”.

Dead Rhetoric: How did you decide upon the guest appearances with Randy from Lamb of God and Ross of Immolation for this record – do you enjoy that extra added touch these veterans bring to these songs?

Cavalera: For sure, I love collaborations and I’ve been doing that for many years now. Every record has a couple of them- the last Cavalera record had Justin (Broadrick) from Godflesh, and the last Soulfly record we had Todd (Jones) from Nails. When it comes to Immolation I had them on the Return to Roots tour with Full of Hell, I became friends with Ross and I love Immolation and was like- it would have been so cool to have him on a record. I wrote the song “Under Rapture” just for him – especially the last part of the song was heavily influenced by the Immolation sound. He was a guest that I wanted even before I had entered the studio.

Randy was a bit more of an accident kind of thing. Josh was doing our album and he’s really good friends with the Lamb of God guys. He was going to do the Burn the Priest album, and I was joking with him saying ‘hey why don’t you bring some of the Soulfly instrumental tracks to Randy and see if he likes anything, something that maybe he could sing on would be really cool.’ He did that, and Randy fell in love with “Dead Behind the Eyes”. Which at the time was nicknamed “Bruiser Brothers”, because it didn’t have any vocals yet. Then I wrote the lyrics, he sang on it and it’s fantastic. He is one of the guys like me who has a unique voice. When you hear it, you know it’s Randy from Lamb of God or that’s Sepultura, that’s Max. Both of them are really cool and I love what they both brought to the songs. Ross brought his total death metal vocals that he brought in, and Randy we sing together in the chorus of “Dead Behind the Eyes” – it’s about Hellraiser, it felt so strong.

Dead Rhetoric: You state in the bio that with your son Zyon in the band now, you feel like you are passing the torch. Where do you see his drumming abilities advancing the outlook and sound of Soulfly?

Cavalera: I think he’s great, and I think the future is really open for him. Both of them, I am passing the torch to him and his brother Igor. They have the band Lody Kong which is great, they are going to record some more songs soon for a recording next year. I am a big fan. I wouldn’t mind if Lody Kong took off to the point where Zyon had to quit Soulfly, because everything we’ve done so far has been a dream come true. I just want the best for him right now. I’m really enjoying how he’s playing in Soulfly. A lot of times in Europe I do meet and greets with the fans- most of the time, all they end up talking to me about is how great Zyon is, the drumming. They don’t even talk about the show- they just talk about Zyon. It’s a big draw in the Soulfly world, and it’s a connection of the father and son playing together- it makes for a cool story. A lot of people like to see this connection happen. Ritual is by far his best album with us.

Dead Rhetoric: How did the instrumental ending cut “Soulfly XI” come to be with the additional saxophone parts – it seems like a very tranquil finish to a quite heavy record?

Cavalera: Yes, it is. The “Soulfly” tracks came to life during the first album as an accident, and became a trademark that we started doing on all of the Soulfly albums. It’s the other side of Soulfly, the melodic, spiritual, mellow side. Which can be a lot of different things, cool percussion, when it was time to do “Soulfly XI” I wanted to do something different. I didn’t want any drums, we programmed the drums and I showed Josh a bunch of Massive Attack stuff and Dead Can Dance and how to program them. He used one of my old, melodic riffs that was ten years old now. He created the whole session and then he got a guy who places saxophone for the Pretty Reckless. When everything was done I was still missing something, anyway he could find a saxophone player I thought it would be great. The saxophone on the song makes it special, it has this cool, jazzy feeling. It’s cool to end a record with that spiritual vibe.

Dead Rhetoric: What did you get across lyrically with this record that may have been different than previous albums?

Cavalera: Josh and I worked on the lyrics a lot together. I was trying to tell him that I get accused of repeating some of the same words- a lot of stuff regarding apocalypses and stuff like that. We tried to avoid those words, and come up with different kinds of words. For example, on the song “Ritual” I wanted to say when you are facing the end, your life is just beginning. Josh thought that was cool, but he knew there was a different way to say that. We switched it to, ‘when you are facing the end, your pilgrimage begins’. That was cool, that was his input turning it into a whole pilgrimage thing.

We touch on a lot of different subjects. “Ritual” is about integrity, the ritual of metal, the ritual of life. “Dead Behind the Eyes” is about Hellraiser, cenobites, Clive Barker and all that. “The Summoning” is about the exploitation of the tribes and how the white man brought disease and religion and tried to force this into the tribes, and they should have just left them alone. “Evil Empowered” is about dictators, all the way from Hitler how they become powerful and they become addicted to power. “Under Rapture” is about a spiritual thing about life and death. “Feedback” is about life on the road. We have a lot of cool lyrics- we have one song called “Blood on the Street” that is a true story about a person that was murdered by the police in Arizona, and nothing happened to the cops – a documentary kind of song.

Dead Rhetoric: Has your definition of success changed from your early years in Sepultura to where you are at now in your music career?

Cavalera: No. Success is playing live, playing in front of your fans, and seeing that they love what you are doing. It can be in front of 100 people, or 100,000. It’s not about gold records or Grammys, or the cover of magazines. It’s about the passion of playing live, and performing for your fans. I get super happy when I play in front of 100 people when they are totally connected to the music, and that’s success. And I get to do this with my family involved, that’s beyond success. I never got into this for fame, or for the girls. We got into this for the music and we stay connected to the music, so it hasn’t really changed through the years.

Dead Rhetoric: Where do you see the state of heavy music globally in today’s marketplace?

Cavalera: I think it’s cool, man. You have every part of the world doing something because of the internet. All the access they can give, you can find all kinds of stuff. You have bands from like New Zealand, Israel, the Middle East, everywhere. It’s not just about America and central Europe anymore. All parts of the world have really great bands and are doing really cool stuff. It’s becoming more global- metal has more of a worldwide scene. It doesn’t surprise me when I hear of a band coming from Scotland or New Zealand, it’s cool. Thirty years ago, that would have been a big surprise, even with us coming from Brazil. It was a total surprise for people, but not today anymore.

Dead Rhetoric: What are the plans for Soulfly and other music endeavors for yourself over the next twelve months?

Cavalera: Right now, the plans are like, I will go on tour with Igor and we will play a hybrid of Beneath the Remains and Arise material, in Russia, South America, and Mexico. Then we will take a little break for the holidays, and hopefully do a headlining tour in America with Soulfly in January – and do a Ritual world tour where we create some kind of cool stage show, statues and organic things on the stage. We want to go to all four corners of the world- I believe the record is strong enough to do that. After that I hope to do some work for Kill or Be Killed, hopefully another record – we have demoed ten songs and they sound great. I’d love to work on another Kill or Be Killed record for 2019. Those are my priorities for the next year right now.