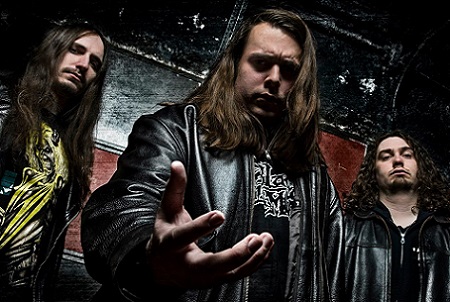 Sometimes, a band’s name can tell you everything you need to know about them. Case in point, Philadelphia’s Fisthammer, whose name lets you know that you are in for a beatdown upon first listen. Influenced by bands like Anaal Nathrakh, Death, Revocation, Nile, King Diamond, Slayer, and Belphegor, the band’s brand of crushing death metal is a needed breath of fresh air amongst the current climate of polar opposites: overtly techy death metal and stuck in the past retro-worship.

Described by drummer Danny Piselli, Fisthammer is a band, “that attempts to play many different styles of metal at the highest level, while still keeping a consistent vibe.” Consistency is best with their latest album, Infallible, which ties together the technical, progressive, and melodic death metal pieces, along with some black and doom. In terms of focusing the writing process, Piselli responds, “Evil and groovy. That’s usually the underlining theme. But prior to that, we try and figure out what kind of song it is. Is this a thrashy tune, or a groovy one, of a technical one, or a head banger. Once that’s established, we kinda go from there.”

They have fallen upon an excellent formula. Many have been raving so far, with guitarist/vocalist Max Svalgard noting Infallible’s reception as “Extremely positive! It’s been awesome! We got reviewed in Metal Hammer magazine which I have been reading since I was 13. And people want to hear what we do next, which is excellent!”

Infallible is Fisthammer’s second release, following 2012’s Devour All You See. In regard to how the two compare, Svalgard states, “It [Infallible] is definitely a major progression and is more refined. Devour All You See was more of a collection of songs that we had prior to entering the studio, where as Infallible had a clear and constant tone. We spent a lot more time cutting songs, and rearranging the ones we had, to make them all worthy of being a part of the whole.” The cover art reflects this as well. “The overall sound of the album is definitely darker than Devour All You See. Devour All You See was our entrance through the door, and I think the cover represented that. With Infallible, our goal was to make a scary album, and a scary good album. And I think the art represents that well,” mentions Piselli.

Speaking of scary, the band doesn’t shy away from interesting and horror-filled topics. Devour All You See contained a song about Kull the Conqueror. Of Infallible, Svalgard cites “The Coven” and “Temple of Posiedon” for their lyrical direction. “[“The Coven”] is about a coven of witches who are being burned at the stake and with their last words they sacrifice themselves to Baal-Berith to come back as an ectoplasmic fog to suffocate the men who killed them. ‘Temple of Posiedon’ is about the son of Gaia and Posiden: Antaeus. The concept is that he is challenges all those who cross his path and once he kills them their bodies decay to feed his mother and he builds a temple of their skulls to honor his father. Posiedon is pleased with the carnage in Antaeus’s wake and unleashes Scylla and Charybdis to slaughter thousands of men so that Antaeus may build an even greater tower.”

Fisthammer is currently an unsigned band, yet they have been a part of several tours and have worked hard at elevating their profile. When asked about the perspective of an unsigned band within the metal scene, Piselli has mixed feelings: “It’s a tough scene to break into, and once you do, you realize its, even tougher to maintain your progress. I tend to be a little cynical when it comes to the music industry as a whole, but what really keeps me going is meeting and talking with all the die-hard fans on the road. Not just metal fans, but music fans. And I feel metal fans in particular can be the most die-hard of any fan. That’s all the motivation I need when it comes to touring and writing.”

But would Fisthammer take the plunge if the right offer were on the table? “We’d love to opportunity to sign with a label, especially if that means more touring opportunities,” says Piselli. “I’ve probably messaged every notable label 10 times over the past few years, and gotten minimal response. I’m confident that we’ll grab someone’s attention sooner rather than later, considering the incredible response thus far for Infallible. All we can do is just continue playing shows, and writing better and better songs.”

Recently, the band was set to participate in Master’s current tour of the U.S., but had to drop off. Piselli remains optimistic about future touring plans, though. “We’d like to do another solo tour late summer/early fall. Our last tour was limited to the Southeast and Midwest, but we’re hoping to make this next one a full U.S. tour.”

Not ready to rest on their laurels, the band has already started writing some new songs. “Since getting back from our last tour, we’ve begun throwing around some new riffs, and I can feel the creativity starting to build up,” he concludes. “I can imagine having some new songs written by the time we hit the road again. Whether we bust one or two out remains to be seen.”