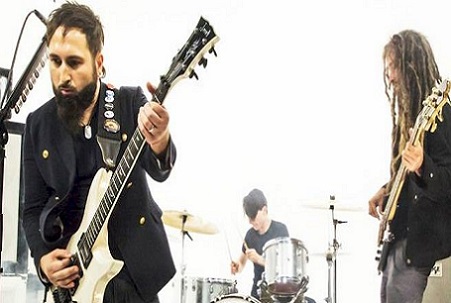 Super Bowl weekend is in full force as this article is being typed, but don’t ask Monte Pittman about it. (“I don’t really have a team. I got too many songs to write for fantasy football.”) Good for him. At least Pittman never had to experience the woes of being permanently attached to a destitute franchise that hasn’t even made it to the big game (that would be this author and the Cleveland Browns). These are all trivial items for the singer/songwriter – only the music matters, which sounds darn-near cliché, but for a guy who is Madonna’s trusted guitarist and a veritable solo artist, it’s the truth. And who are we to argue?

Pittman’s third solo album, The Power of Three, recently hit shelves/digital landscape a few weeks ago, propped up by some strong support via indie staple Metal Blade, as well as the casual curiosity from those who want to hear what happens when Madonna’s guitarist goes to Denmark to record with famed Metallica producer Flemming Rasmussen. The result is a tight, song-oriented rock/metal happening, graced with Pittman’s impactful layered vocals and sticky choruses. Pittman – who has previously done time in Prong – should be lauded for purveying the art of the “song” on cuts like “Dark Horse,” “Everything’s Undone,” and “Before the Mourning Star,” each of which are heavy, hooky, and immediate.

With this in mind, we grabbed the good-natured, ultra-cool Texan for a chat via Skype. Here’s what transpired:

Dead Rhetoric: The pop world and the metal world, you are finding it difficult to reconcile the two, or are there a lot of similarities?

Monte Pittman: In music, there are only so many notes. It’s what you put behind it. That’s from the musical side, but from the metal, there’s not too many similarities in style. Usually people ask, “How did you go from Madonna to Prong, and Prong to Madonna?” And I say the one thing they both have is attitude. I looked at Prong as heavy dance music, and they both came from CBGB’s. Tommy [Victor] was the sound guy, Ted [Parsons] was the doorman, and Madonna played there with The Breakfast Club before she was “Madonna.”

Dead Rhetoric: You have three styles – if we want to throw in your solo career – going at once.

Pittman: Yeah, I like a different types of music, and it all comes out.

Dead Rhetoric: Working with Flemming Rasmussen – how did you get hooked up with him?

Pittman: I had a day off in Copenhagen while on tour with Madonna, and I didn’t know what to do. [laughs] I was tired of going out, and I was looking for something to do, and I thought, “Isn’t Sweet Silence Studios here?” So I looked it up, found an address online and went there. There was a sign on the building that it was going to be torn down, and I don’t remember if there was info there from Flemming or whomever, but it said “The building is getting torn down, and I’m still available to do mixes, and contact me here.” I said to Madonna’s tour manager, “Hey, if I invite him to the show, will you take care of him?” So I called him and said, “Hey, look, we’re playing tomorrow night and wanted to invite you out.” I told him the story that I didn’t know the situation about the studio, and Flemming said he was out of town, but his daughter would love to go.

So the next time we were in town, we all got together, and that’s when we started talking. I gave him my first CD, my acoustic CD (The Deepest Dark). I said, “Here’s this, use this as a coaster for your beer or whatever.” [laughs] And he said, “One day we’ll get together and work on something.” We kept in touch, and in 2012, I was there in the summer with another day off, and he asked if I wanted him to fire up the studio and record a couple of tracks. We knocked out an acoustic EP, we did that all in one day. From there, I gave him all of my demos and he really liked the heavy stuff I had, and said, “This is what you need to be doing.” So we started making plans to go out to Copenhagen, then after that, I played it for Brian Slagel, he signed me to Metal Blade, and here we are.

Dead Rhetoric: With The Power of Three, you did the heavy stuff, but there’s a lot of great vocal hooks. It’s rare to these type of vocals in the context of regular metal.

Pittman: I think of it like this: The first album was an acoustic album, so I could recreate that anywhere. No calling the drummer and asking him if he’s available, then him going, “No, sorry, I can’t make it.” So then you can’t play. A lot of it had to be something I could recreate. Some of the songs, there’s a song called “Out of the Black” on the Deepest Dark album. Live, we play it heavy, but recorded it acoustic because I wouldn’t have been able to recreate it anyway. Even if I would have recorded it with a band, I still would have recorded it acoustic. A lot of these songs on The Power of Three were put together on an acoustic [guitar], so if you think about the singing part, that’s where it comes from.

Dead Rhetoric: I can already picture how a few of these songs would sound stripped-down, like “Everything’s Undone.”

Pittman: The part before the last breakdown before the chorus…I originally thought we’d record an acoustic part for the album, but thought, “Let’s do this how we’d play it live.” I told Max [Whipple, bass] to just play through the chords one time to give me time – we wanted to think ahead as to how it would be live when we’d have a quick transition where it would be almost impossible to do. We recorded live, together. In the same room, on tape…if it wasn’t so cold, we’d be sweating over each other.

Dead Rhetoric: We don’t get that many albums where they’re recorded live. Most are patched together via ProTools.

Pittman: When people ask, “What did you learn from Flemming?” Most people say, “People don’t buy albums anymore.” Then you can ask, “How many people are making albums?” They make music, and they’re looping a bridge, and cutting and pasting parts. How many times do you get people who are in a room, and you get to a part that’s just perfect then you hit the wrong fret. But then you try it again, and get it right. 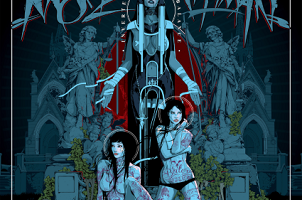 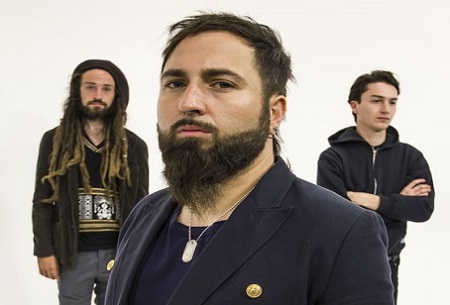 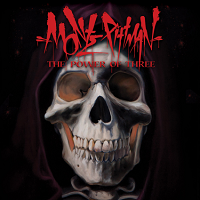