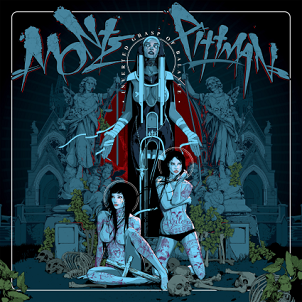 Quite easy to dig Monte Pittman’s 2014 The Power of Three, a sizeable offering of hook-oriented songwriting in the frame of metal and heavier rock. The man (who spends his free time in Madonna’s touring band and was once a member of Prong), doesn’t belong to one particular bucket as we’re so prone to do, but is a certifiable ace guitarist and singer, something that carries over to his new body of work, Inverted Grasp of Balance.

Joined by drummer Richard Christy (Death, Iced Earth, Charred Walls of the Damned) and bassist Billy Sheehan (David Lee Roth, Mr. Big, Talas), Pittman has saw fit to increase the heaviness factor, most notably on “Guilty Pleasure.” While it’s not necessarily odd to hear Pittman singing alongside Slayer-like riffing and blasts, it shows that he’s far more effective in the even-harder-to-pull-off area of classic, memorable songwriting, as heard on “Panic Attack” and “Times Are Changing,” the latter of which would be prime for radio and/or television if this were 20 years ago.

Elsewhere, elements of Prong make their way through “Double Edged Sword,” while “California” finds the man being a bit more light and poppy, if you will. Then again, there’s an obvious dark, Alice in Chains swirl to “Skeleton Key,” a cut worth taking note of.

A hard-working dude who tours the globe, plays in the LA Kiss house band, does regular jam nights in Los Angeles, and gives online lessons, Pittman is eminently likeable. It only helps his cause that Inverted Grasp of Balance, like its Power of Three predecessor, puts out a healthy dose of songs that we simply can’t get anywhere else.