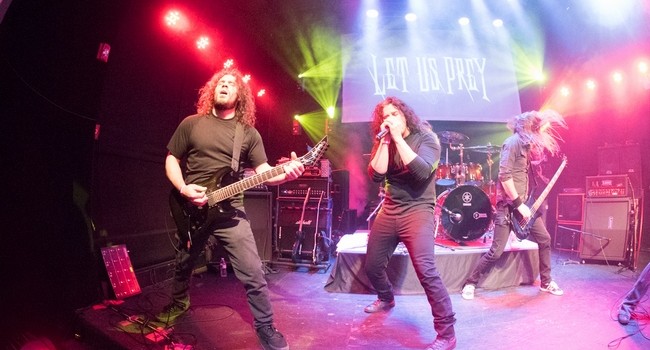 We at Dead Rhetoric get inundated with a flood of releases weekly – from self-released efforts all the way up to the biggest acts in the heavy music scene. Quantity however does not ensure quality – which is why when a newer act like Let Us Prey comes out of the gates with a blockbuster opening EP as they have with The Saint of Killers, you better believe that we sit up and take notice.

The brainchild of vocalist/producer/songwriter/ arranger Marc Lopes and guitarist/bassist/riff master Jon Morency, Let Us Prey hits upon a number of classic, traditional, power, thrash, and melodic death influences – names as diverse as Fear Factory, In Flames, Judas Priest, Nevermore, and Soilwork come to mind on this six-song recording. Stacking up well on all fronts from professional cover art to killer production values, the low-tuned guitar/double bass barrage that sets off “Above the Vaulted Sky” suck you in from the start, all the way to the fading guitar chords and piano ending of closer “And Hell That Followed with Me”.

Calling up Marc Lopes one recent afternoon, we spent over an hour discussing the art of heavy metal and surrounding topics that he was more than willing to expand upon. You’ll learn his take on the tenuous tightrope of cover/tribute bands versus original acts, the story of how Let Us Prey came together, and his thoughts on social media/ instant technology that can be a double edge sword if not used properly. Fascinating, opinionated, and passionate – his love for the genre comes through loud and clear.

Dead Rhetoric: Tell us about your first memories surrounding music growing up – and how you made the journey to heavy metal and eventually pushing to sing and perform in bands?

Marc Lopes: That’s an easy one. My first experience with metal (and) rock would be Kiss growing up. That was more about the image and vibe of it, wasn’t really the metal thing. MTV, 1982- Iron Maiden video comes on and it changed my life. It was “Run to the Hills”, and when I saw Bruce (Dickinson) coming out doing what they do, pure energy at the time I hadn’t seen anything like that at the time. I was more into playing with my G.I. Joe’s before that, you know? Seeing that made me want to be a musician. The way it made me feel, I remember going to get the cassette at the time and listening to it so much that I wore it out and I had to go out and buy another one. I had this wicked cheap ass yard sale one speaker tape recorder that I used to drive around on my piece of shit bike in the neighborhood and everyone thought I was insane- and that’s okay, they were right!

I actually started playing drums, so to say it was all downhill from there. I played drums for a long time until I was about 18, and then I remember I had a band that at the time the singer was okay, I used to help write the lyrics and melodies to the material. I had a knack for it. He never interpreted it right, so I did the old Night Ranger thing and singing and playing drums at the same time. I just decided from there I wanted to sing, and I’ve been doing that ever since.

Dead Rhetoric: Did you ever take any formal lessons or was it more trial and error by ear?

Lopes: Actually I still do take lessons which a lot of people find surprising. I took classical training and I was in all-state chorus growing up, I naturally had a singing thing I could do. I did that for a while, I got into better bands and then I changed teachers, to be more into the rock style. I stopped for a while, you go through some dark, tough times sometimes and when the grunge era hit it killed metal for a while here. It was pretty depressing to even try to play, no one would listen. I stopped really getting into it as much. Only about 5-6 years ago I started taking lessons again with a teacher online, and never stopped training. Always picking up techniques, and I am a firm believer that you can just never stop learning.

Dead Rhetoric: How did the concept and lineup of Let Us Prey come together – as it’s essentially a two-man operation in the studio at least with your debut EP The Saint of Killers but you’ve fleshed things out with a full lineup for live performances?

Lopes: That’s an interesting story. Let Us Prey came about from the ashes of a band called Hellspeak. Hellspeak was a band I had prior to this- we had put out an EP as well, we did two shows opening for Shadows Fall, as Jason Bittner was in the band, along with Chris Rapoza and Matt Leff. That’s how Jon (Morency) came into the picture- he’s the guitar player in Let Us Prey, and this is going to get confusing, he’s my drummer in my Judas Priest tribute band (Hell Bent for Metal) and my Metal 101 cover band- I had no idea he also played guitar. When we were in Hellspeak he was a second guitar player who wanted to try out. Lo and behold he was awesome. We released the EP (The Slaughter Rule of Agony), the whole PR thing, we had interest from record labels and management from overseas- and we were hit with Matt has lung cancer. So he had to go for treatments for that, we started gaining more interest and winning competitions with Tune Track, we were featured on Steel Panther’s demo thing twice, a lot of cool stuff was going on.

We go to get the band back together after Matt’s treatment was successful, we were looking for tours, buy on or do what we had to do to get on the road. He got hit with brain cancer. So that was a tough one. The brain cancer thing happened, he had to get emergency surgery, lost the feeling in his fingers on one of his hands. The decision was made- what are we going to do? I was going to carry on the Hellspeak thing with Jon because we had talked about writing riffs, keeping the same kinds of tuning as they are unique for what we do. Next thing you know we had 12 brand new tunes that we had put together in 3 ½ weeks. To shorten the story, out of respect of the situation we put Hellspeak to bed. I told Jon we should start another band, (and) Let Us Prey was formed. We wrote together for four months, and we recruited Yanni Sofianos the drummer who is also in Obsession and End-Time Illusion, he had joined at that time. We went in the studio last January and nailed out those six songs right away before I went to NAMM at the time. In that process we had another lead guitar player, but that didn’t work out. He just went AWOL on us.

We recruited a bass player Ned at the time. We did a bunch of shows, Matt Fawcett of Sinate who does a bunch of leads on the EP from New Zealand. We found him on the internet through mutual friends over there, there are a couple of radio stations who were into the Hellspeak thing. We played with Act of Defiance and a couple of local shows- and what ended up happening is before the record came out, Ned left to pursue his career in IT, Matt went back to New Zealand as it’s tough to come back here with finances, so he went to Germany. Yanni left because he didn’t have to be time in all the bands he’s in. Jon and I wrote everything anyways, I wrote all the drums, I arranged it, I produced it- Jon did all the guitars, rhythms, some leads, played the bass- I wrote all the keyboard parts and had other people come in to do them. It was never conceived to be just a studio project- it was always going to be a band. We are using the duo thing as the central axis of what we did for the EP. Now we have Darin Moyen from Angor on drums, Felipe Roa on guitar for Acaro, he played in Angor as well and was a touring guitarist for Shadows Fall at one point- Felipe also is in Kobra Kai with me, another cover band, Steven Lanning also on bass.

When you have good guys and good players, it’s good to keep everybody close, you know? Makes things a whole lot easier. I’d rather deal with the same four guys in three or four bands. They are easy to work with, so that’s huge for me. It’s being shopped around, Jon and I are the core of what we are doing. If everyone wants to stay around, all the better for it. We already have 33 songs written for the next few records, we are way ahead of schedule- and the next record is already in pre-production. 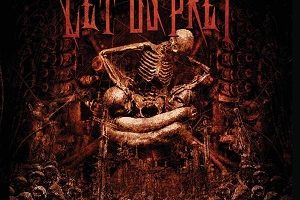 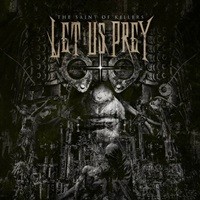