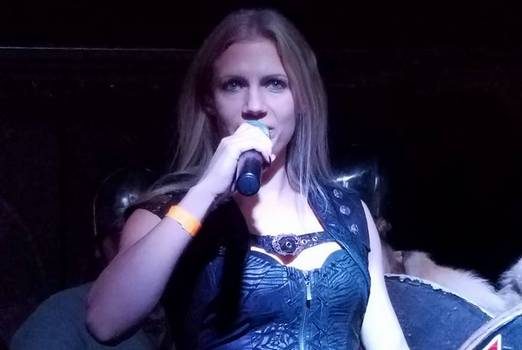 When headliners take nights off from a long tour run, support bands do whatever they can to set up smaller club shows and keep the financial needs floating. Leaves’ Eyes and Omnium Gatherum accordingly break away from their autumn Sonata Arctica North American dates and pull this one-off in the confines of Firehouse 13, a favorite stomping ground for this scribe when in Providence, RI. With doors at 7 pm, the two-hour drive would take place in mid-afternoon as to avoid as much rush hour traffic as possible… gearing up for a night of solid symphonic and melodic death metal with two local acts rounding out the bill.

Due to soundcheck running a tad longer than expected, doors would open about 15 minutes late- no big deal with the plan for the night to end before midnight. Curiosity regarding turnout would be part of the nervous anticipation hanging over the evening (by this scribe’s estimates, no more than 60 outside of the bands) – and the bummer from the cool merch guy having to turn away credit/debit sales. Cards check cash in today’s consumer climate chess game, so even if someone forgets to procure a card reader for a tour with foreign bands, alternate methods should be employed as you were leaving plenty of money on the table to be had.

Connecticut newcomers Virus of Ideals started the night with their brand of melodic symphonic death metal. Vocalist Jessica Rose and keyboardist Sean ‘Orc’ Adams provide the beauty and the beast melodies, running through all the songs on their recently released For All My Earthly Days EP. The early birds took to “Save Your Tears” and “Bitter Parody” like lemmings, making an excellent impression to start the night strong. Let Us Prey from Massachusetts brought the heaviness (as well as continuing the black stage clothes theme of the evening) – a sonic explosion of power, intertwining everything from Soilwork and Fear Factory to Nevermore and even blackened textures both vocally and musically. “Above the Vaulted Sky” and “In Suffering” are highlights from The Saint of Killers EP they aired, along with a new song that again crushed the onlookers. Between Marc Lopes’ insane low to high chameleon-like range vocally and his bandmates that keep up with the down-tuned proceedings, it’s little wonder why they are making strides to ascend very swiftly up the ranks.

Another quick change over put Omnium Gatherum on stage a little after 9:10 pm – and they wasted no time digging into their fine discography of melodic death metal. All six members of the band would be very active onstage – loads of hair windmills, guitar poses from Markus Vanhala and Joonas Koto for the Jackson V’s, and beaming smiles from singer Jukka Pelkonen as he perfected the sideways devil horns salutes before, during, and after their songs (often joining both hands together as a symbolic O like their logo). The crowd fed off the stage energy, highlights included “Ego”, “New World Shadows”, “New Dynamic” and a boatload of songs off their latest record Grey Heavens, from opener “The Pit” to “Skyline”, “Frontiers”, and “The Great Liberation”. Nine songs in total, many hope for another headlining North American run within the next year or two.

Leaves’ Eyes pulled out all the stops in this intimate setting – even when it wasn’t necessary, as the ardent fans would be content to just take in a headlining set of songs. But they brought out five warriors dressed in old garb, holding shields, swords, axes, and other weaponry for the start and ending of the show- as well as making a brief appearance in between. This would be the first US tour for latest singer Elina Siirala, and her fantastic clean melodies plus obvious operatic range prove that the band will survive the loss of long-timer Liv Kristine. Male growler Alex Krull, beyond having the longest hair in the business (at least three feet from head to back), is the premiere front man, cajoling the legions to jump, clap, and sing along to the band’s unique blend of Celtic/ cultural oriented symphonic metal.

The bulk of the focus would be on the recently released Fires in the North EP with the title track and previous full-length King of Kings as “Sacred Vow”, the ripping opener “Halvdan the Black” plus double trouble “Swords in Rock” / “Edge of Steel” certainly left their mark. Older favorites like “Take the Devil in Me”, “My Destiny”, and “Farewell Proud Men” received rapturous response as well. 16 songs and 75 minutes later, the band reminds us that even with the interesting world/ political events that can take place, one area where unity remains is within the metal genre. Let’s hope after this first week of turmoil getting this North American run off the ground with Sonata Arctica – securing visas less than 24 hours before entering the country, and a tour bus failure the second day in – becomes fodder for laughter and smooth sailing herein. 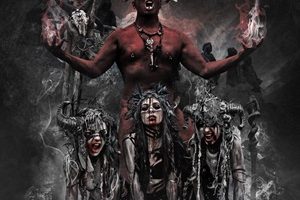