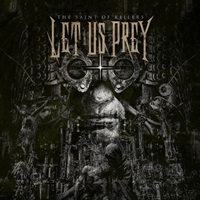 Marc Lopes and Jon Morency are the main duo behind Let Us Prey – handling the bulk of songwriting, recording, and instrumental/ vocal duties for this debut EP The Saint of Killers. If you’ve followed the New England metal scene for any length of time, you are well aware of their abilities in the studio and stage (if not, look them up on Metal Archives). As such, these 6 songs possess a higher level of attention to proper detail – from riff flow to choruses, hooks and lead breaks plus that all important multi-level connection necessary to stand out from the masses trying to break through a crowded scene as a newer act.

Naming reference points will be fairly easy to most when it comes to the dense, darker power riffing and insane groove meets progressive meets thrash drumming. A little Nevermore here, some Soilwork there – plus a smattering of Fear Factory cyber-ness and Testament ferocity (especially from The Gathering forward). Marc as a vocalist has layers of voices to add to the mix – he can convincingly hit a lot of Halford/Dickinson bird call notes during the opening charger “Above the Vaulted Sky” (the riff after the chorus sure to shred audiences into a pit frenzy), and then scream or growl his face off in the best Speed Strid meets Randy Blythe montage for the vicious whirlwind title track. Jon Morency as guitarist and bassist showcases a double threat attack, and guest Obsession drummer Yanni Sofianos is relentless when necessary on all fronts, but also very melodic and in the pocket when called for on a more melodically inclined cut like “In Suffering”.

Topics range from artificial intelligence to war, as well as personally tackling some of the singer/songwriter’s depression battles. On the closing eight-minute plus highlight “And Hell That Followed with Me” expect a track that goes from more of a King Diamond-esque number with appropriate chilling keyboards to a roller coaster twister that can be blast /kick heavy in one passage, then a churning, ominous labyrinth the next a la old Machine Head. All That Remains’ Oli Hebert comes in with a guest lead on the title cut, plus strong artwork from the renowned Gustavo Sazes (Arch Enemy, Kamelot) and mixing/mastering help from Pete Rutcho (Revocation) gives Let Us Prey the extra push to the top – but the songwriting and performances already stand head and shoulders above what a newer band normally achieves the first time out.

All who love a cross-section of the aforementioned bands need The Saint of Killers in their lives. Don’t let the labor and talent level go to waste – Let Us Prey deliver, crush, and fill a void left by Nevermore for sure.