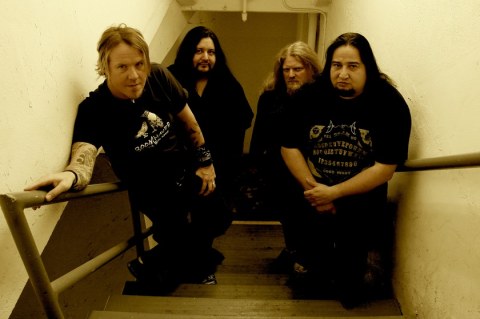 During the course of Fear Factory’s much-hyped reformation, one quote has resounded:

“The infection has been removed
The soul of the machine has been improved.” – “Archetype,” 2004

If you are as a sharp as we, you’ll no doubt figure the above quote was referring to then-departed guitarist Dino Cazares, who left the FF camp amidst a flurry of differences of the irreconcilable nature. Post-Cazares Fear Factory played nice in the press, but back then it was obvious: Fear Factory couldn’t function with Cazares in the band. Subsequent albums Archetype and 2005’sTransgression were both lacklustre, as sales declined and interest waned. Time has healed those wounds (or maybe Ministry concerts) apparently, thus rendering said quote (and two Cazares-less albums) all but meaningless. For now.

The here and now for Fear Factory involves Cazares, singer Burton C. Bell, bassist Byron Stroud and new drummer Gene Hoglan. Such an imposing line-up could only produce something as massive as this year’s Mechanize, an album that delivers the classic Fear Factory sound many were clamoring for since the band took a nosedive with 2001’s ill-conceived Digimortal. It will tear your neck off and most of all, firmly re-establishes Fear Factory as the de-facto industrial metal band.

We caught up with Bell during an exhausting press day, but the man was loose and talkative, almost knowing in advance the type of questions we had in mind. No worries – Bell is a pro, answering questions about the ongoing legal battle over the Fear Factory name, and the old lineup’s past “transgressions” in stride…

Blistering.com: If I were to tell you five years ago that you would be back with Dino and also have Gene Hoglan in the band, what would you say?

Burton C. Bell: I don’t know…strange things happen in this world [laughs]. It happens in its own course, I guess. If you would have said that to me five years ago, I definitely would have thought you were on drugs [laughs]. Never say never.

Blistering.com: Just by listening to your vocal performance onMechanize, it sounds like you have been invigorated. Is that stating the obvious?

Bell: Absolutely. The greater consciousness of this band is really strong right now and with Dino back in, it’s like that history, that chemistry is working again and I missed it.

Blistering.com: Could you say that perhaps that chemistry wasn’t there for Transgression?

Bell: Yeah, there was something…something lacking. There was a change going on in the music that was definitely a transgression of Fear Factory, that’s for sure.

Blistering.com: Has there been any progress on the legal battle over the band’s name? Rather, are you concerned about it?

Bell: I’m not that concerned about it. We’re using it. We have an album coming out, we toured under the name. Dino and I founded the band. I’m very confident that all parties can come to a resolution and we don’t have to worry about it.

Blistering.com: Has it been hard to have your relationship with Christian [Olde-Wolbers, bass/guitars] and Raymond [Herrera, drums] severed?

Bell: Well, I’d like to say there was a toll on the relationship before all of this went down anyway. Things that were going on in the band before the lawsuits happened… it all started way before that.

Blistering.com: Around the time when Fear Factory took a break is when your Ascension of the Watchers project came out along with the formation of City of Fire. Do you think what was going on with Fear Factory prompted those projects?

Bell: No, not at all. I had the Watchers going since 2002 and it came out in 2007 when I was able to find the right label. The Watchers and City of Fire came from the interest of just doing something different. I was definitely waiting for things to change in the Fear Factory camp before I started working on it again, that is true.

Blistering.com: You’ve been known to be more of a just a metal guy and I know some people blamed you for the not-so metal direction of the second half of Transgression. Looking back, would you have done things differently on that album?

Blistering.com: As for the current line-up, describe what it was the like the first time you stepped into the rehearsal room with Dino, Gene, and Byron.

Bell: It was really cool being surrounded by very competent and very well-renowned musicians. Gene and Dino, it took them a couple of weeks for them to lock-in with each other and understand each other’s methods of communications. Once they locked, there’s nothing you could say other than it was magic. It was really cool; I was sitting there smiling [laughs].

Blistering.com: Was there any one moment that spurred the reunion between you and Dino? Or was it more of, “Hey, we’re old friends, let’s put our past differences aside”?

Bell: That’s exactly what it was. We were friends before we were in the band together. It was one of those things where time heals. I got to the point where I missed my friend and when he was at that Ministry show (in 2008) in LA, it was like, “Hey, what’s up.”

Blistering.com: For Mechanize, was the album’s creation any different from the way you worked in the early 90’s?

Bell: Dino and I would sit in the rehearsal room and come up with ideas. And even before we’d go into the rehearsal room we would sit and discuss different ideas like the direction of the album, the lyrics, artistically, musically, which is what we used to do. Dino and I shared the same vision years ago when we started Fear Factory for the first few albums and having that back has really sparked a lot of the creativity again.

Blistering.com: I know there’s a concept running through the album, which makes me wonder if you work better if you have some type of lyrical guidelines in which to work with.

Bell: [pauses] When it comes to lyrical guidelines, we have this poster board that we have on the wall where we write down titles, ideas. I really wanted to keep it with what Fear Factory is and that’s anti-establishment, anti-conformity…pertinent statements. I wanted to keep that consistent with the album. Being influenced by the things I was reading certainly helped and they drove some ideas forward. If you’re living in this world today, just being affected and with everything I’ve seen, that was a big influence as well.

Blistering.com: Do you find it fitting that some of the ideas you presented back in the early 90’s in terms of technology taking over mankind are now coming to the fore?

Bell: I do some see correlation, yes. That was my goal as a science-fiction writer: to foresee into the future and that is what you see today. My favourite example is Orwell’s 1984 was originally titled 1948. That was the time period during the McCarthy trials, the communism, the witch hunts. That’s what Orwell was writing about and what he was saying was strong.

Blistering.com: The latest trend is for bands to play their classic albums in their entirety. Will we see that now that it’s the 15th anniversary ofDemanufacture?

Bell: Oh yeah. We’ve definitely discussed that – that could be cool.

Blistering.com: Some songs like “Dog Day Sunrise” you haven’t played in a while I would imagine…