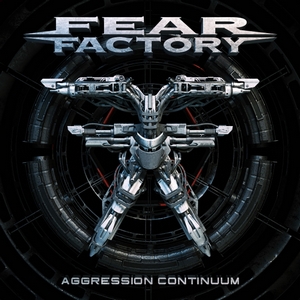 Unfortunately, at this point there’s not much that can be done to separate the issues surrounding Aggression Continuum from the music. With a series of events including a massive legal tie-up due to the Fear Factory name as well as the heated online controversy between now ex-member Burton C. Bell and Dino Cazares, it seems lucky that we are even sitting here discussing this album at all. And long time fans have much to be thankful for, as Aggression Continuum is one of the strongest Fear Factory albums, period.

That futuristic, cinematic cyber groove that has defined Fear Factory is ultimately at its best with Aggression Continuum. The machine gun riffs of Cazares immediately grab the listener as the electronics swirl around them with opener “Recode,” leading into a big opening by Bell – who sounds more angry and vicious than on many recent releases (like Genexus or The Industrialist). Perhaps it’s the frustration from the then on-going legal issues, but the aggression (hence the title) is at near Mechanize levels when they really go for it. Second single “Fuel Injected Suicide Machine” truly captures this essence, with furious riffing and sci-fi atmosphere driving a vitriolic attack. It may very well go down as one of the more iconic songs the band has done since the Demanufacture/Obsolete era, and it feels very much from that time period, really capturing that melodic/heavy dynamic that has defined the band.

It’s hard to not get excited with the thrilling atmosphere that the hardest and heaviest tracks provide. The later epic duo of “Manufactured Hope” and “Cognitive Dissonance” hit that sweet spot of pounding industrial rhythms, intense bulldozing riffs, and snarled vocals, but stop and smell the melodic parts at just the right moment to knock things out of the park. The driving riffs and drum beats over “Manufactured Hope” when the clean vocals kick in provide one of the best examples of how the band can switch up those contrasts for maximum destruction. The more straight-forward attack of “Disruptor” benefits from that perpetual buzzing guitar groove, only pausing for a brief dose of melody before returning to the forefront.

On the other hand, the band doesn’t just regenerate nostalgia for their early days and several tracks provide lots of promise (particularly concerning the band’s future) as they keep the essence of Fear Factory while doing some slightly different things. The massively groovy “Collapse” has some monolithic vibes as the band chugs hard in a very cinematic way. It’s quite catchy, but still maintains a consistent heaviness to it. “Purity” goes in a more melodic direction, complete with one of the album’s strongest choruses by Bell, as the underlying grooves keep it heavier despite the more accessible feelings. “Monolith” also utilizes some rather melodic elements but maintains that mechanical FF vibe, even at its most gentle.

If the band was to pick out a fitting tribute to an end of an era, there’s no better candidate than that of Aggression Continuum. The Bell/Cazares combination is at its strongest on disc, and it has some of the best dynamics of the furious rage and angelic melodies that allowed Fear Factory to rise up with their unique and iconic sound in the ‘90s. Even without Bell going forward, the potential is there with Cazares’ leading the attack so one has to hope for the best. Regardless, even though Demanufacture is the band’s definitive classic, Aggression Continuum easily sits alongside Obsolete and Mechanize as one of the band’s best works and an absolute must for metal fans new and old.