Unlike their countrymates and one-time sonic reference Entombed, Stockholm, Sweden’s Dismember have stayed the death metal course, carving out a legacy that is as bullet-proof as the metallic shield that has fortified the band since the late 80’s. And contrary to public opinion, there has yet to be a slip-up in the Dismember catalog – Massive Killing Capacity owns, as does Death Metaland even some of their newer works like The God That Never Was.

Characterized by the buzz-saw riffs and once-vaunted “Stockholm Sound,” Dismember have had to play runner-up to Entombed to the better part of its career, only to make a pass when Same Difference rolled around and Dismember kept chugging (quite literally) with Death Metal and 2000’s Hate Campaign. These two albums have set the benchmark for all Dismember albums to come, creating the band’s now trademark volley between primal Swedish death metal and sweet, Maiden-inspired melodic death.

2008 brings Dismember’s 8th studio album simply titled, Dismember and it’s everything we’ve come to expect from the band – feral, swarming, with that buzz-saw guitar tone and galloping Maiden melodies. Highlighted by storming numbers like “Europa Burns,” “The Hills Have Eyes,” and “Combat Fatigue,”Dismember shows a band with no tread on its wheels, still capable of killing ‘em when they have to.

Much was to be discussed with lead guitarist and co-founding member David Blomqvist. Of topic was the departure of longtime drummer Fred Estby, the aforementioned Massive Killing Capacity (which, as you guessed occupies a soft spot in this journo’s heart), and the new album. A sarcastic, funny dude, Blomqvist called yours truly and the very un-metal hour of 6:30 AM EST to BS.

Blistering.com: First off, how is life without Fred?

David:Well, from a songwriting standpoint, it’s not that big of a difference. We miss him more from a standpoint that he was a good friend to have in the band. The process for the new album was still pretty smooth. I think Fred was ready to move on. He has a family, three kids and he can’t tour all the time and we understand that, even if some of us don’t have kids. There’s lots of people who think there is some type of animosity between us and Fred, but that’s not the case.

Blistering.com: How is new drummer Thomas Daun working out?

David: He’s been amazing so far. We met him through Martin (Persson, guitars), who has a lot of contacts in the scene. We didn’t know anything about him until we saw him play. After we did the first show with him, we were like, “Who the fuck is that?” He’s almost 10 years younger than Matti, so it’s cool to have someone that young playing with us.

Blistering.com: You’ve had your share of interesting album titles through the years – Death Metal to Where the Ironcrosses Grow, so why the self-titled album this time out?

David: Uh, I think it was Matti’s (Karki, vocals) idea. I asked what the title was going to be and he said it wasn’t going to have a title and I was like, “Ok.” (laughs).

Blistering.com: It sounds more of the same classic Dismember.

David: For me, I just wanted to go with the same, old-school vibe we’ve had for years. I still write old, recycled riffs that some people say sound like Autopsy, which is fine – I couldn’t care less.

Blistering.com: The material that really stands out for me is the melodic stuff on “Under A Bloodred Sky” and “Tide of Blood.”

David: Some of the melodies I write are either very old, or very Maiden-esque. Honestly, I wanted to have these type of things on the very first album, but everyone was like “No, no!” I love those Steve Harris gallops.

Blistering.com: At this point, how hard is it to choose a setlist?

David: We play about seven or eight songs from the new album. There’s a few that might not work, so we’ll see. We don’t want the crowd to just stand there and stare when we’re playing these songs.

Blistering.com: How have the live dates been so far? I know you just got back from Germany…

David: Ah, the German tour was more the usual stuff with diehard fans. We toured with Destruction and we played stuff from the first album and some other cool stuff like “Fleshless,” and “Reborn In Blasphemy” and “Skinfather.”

Blistering.com (interrupting) So everything from Indecent and Obscene

Blistering.com: I wanted to get your thoughts on Massive Killing Capacity because it seems to be the most maligned album in the Dismember catalog. I’m in the minority that it’s a stellar album. What do you think about it?

David: Honestly, that’s the one I like the least out of our back catalog. The songs are just too slow, as is the tempo. I prefer the fast songs, which is why I like “Frozen Fields” the most. There also isn’t enough guitars; it’s not as heavy as the other albums.

Blistering.com: What prompted you to go in that direction?

David: I don’t know, everyone wanted to change, but I kept saying, “Guys, we should play faster songs.” It was just a real conservative album, although I could still write songs like that.

Blistering.com: So what are your favorites from that album? Do you like (the unbelievably heavy and awesome) “Crime Divine” at all?

David: (laughs) “Frozen Fields,” definitely, “Collection By Blood” (Editor’s note: fast songs) and the last song, “Life – Another Shape of Sorrow.” “Crime Divine” is just alright. We haven’t played that one in 10 years.

Blistering.com: Some have made the argument that you made Massive Killing Capacity in retaliation to Entombed’s success with Wolverine Blues.

David: No. We’ve never been like that. Back when Nihilist (pre-Entombed) was around and we were getting started, people were saying we sounded like them and we just got fed up with that and stopped competing with them. We’ve made the songs we’ve wanted to make. I could care less. We do have some history with them, Nicke (Andersson, Entombed drummer) played bass on our first demos and I used to play with them as well.

Blistering.com: Switching gears, was Nuclear Blast’s handling of Hate Campaign the straw that broke the camel’s back in terms of your tenure with the label?

David: Yeah. The record label wasn’t thinking about the music at the time. They were thinking about record sales and that was when black metal was really big and so was silly power metal, so we got fed up and left.

Blistering.com: I forgot to mention earlier that your lead sound is instantly identifiable, even on some of the newer stuff.

David: (laughs) We’ve had the same set-up on guitars forever. I just rip-off Dave Murray (Iron Maiden) whenever I can. No, no, I’m just kidding about that.

David: We just got on a new tour with Hatesphere and Fall of Serenity, so we’ll be doing that for a few weeks. As for the show, what you’ll see is what you’ll get and that is good death metal with no compromise. We don’t play that crappy, fake death metal. Fuck that shit. 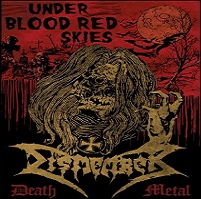