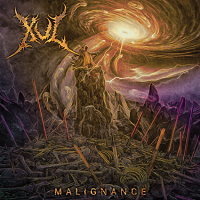 Already on the board for 2015 with their excellent Extinction Necromance EP, British Columbia extreme tech death up-and-comers XUL have found it within their kind hearts to reissue their first album, 2008’s Malignance. Complete with new artwork courtesy of Remy Cuveillier (Headsplit Design) and a remastering job from Abigail Williams main dude Ken Sorceron, Malignance effectively pins down the band’s under-the-radar early days, as well as jostles the band into position as one of Canada’s more exciting groups to fall under the raucous, hyper DM banner.

On the level with many of their Canadian contemporaries in terms of technicality (really, a lot of these bands have us Americans beaten by a mile), it’s suitable to point out that XUL doesn’t necessarily go out of their way to blow people out of the water with their fretboard/drumming acrobatics. It’s certainly not subtle, but the manner in which the band sequences songs like the opening “Battlestorm” as well as “Hordes of Black” prove that you don’t have to cancel out song-flow in order to impress folks with your playing. While that’s another notch in the band’s headboard, so is the gradual, effacing black metal current that builds up during “Winter’s Reign,” which as suggested by the title, would certainly clock in and around BM territory. (Sufficient props to the guitar tandem of Bill Ferguson and Wallace Huffman for their sterling playing throughout.)

There’s additional moments of full-throttle to be had, like “Tomb of Tyrants,” where upon a bounty of sideways riffing is to be had, so it’s readily apparent XUL had a bit of a diamond in the rough with Malignance. Young bands rarely go back and rework their initial forays, yet massive credit to the BC crew for having the headspace to tinker with what is largely an exciting, agile debut. Let’s have more of this.