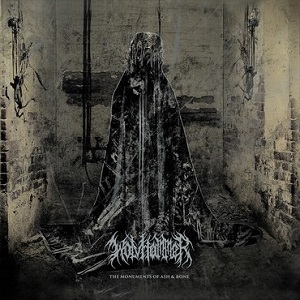 Lots of Adam Clemans to be heard in the next few months, starting with Wolvhammer’s new The Monuments of Ash & Bone and now Skeletonwitch’s forthcoming Devouring Radiant Light. The man has received and will no doubt get more face-time as he continues to front the vaunted Ohio thrashers, but Wolvhammer is where he’s arguably most at home. Four years removed from their last studio album, Clawing into Black Sun, The Monuments of Ash & Bone find Wolvhammer (who are rounded out by guitarist Jeff Wilson, bassist Andrew Gerrity and drummer Garry Naples) maintaining their stronghold on the frothy, blackened sludge game.

As usually is the case with Wolvhammer, their penchant for spirited, demanding black metal riffing remains spot-on, as heard by way of album opener “Eternal Rotting Misery.” (If this is a take on Paradise Lost’s “Rotting Misery,” then fantastic. Can’t have enough of those.) The song’s stealth blasting is met with a sanguine groove that is simply diabolical. Clemans and Wilson seem to have found the appropriate landing spot for imbuing sludge with their BM antics. While “Law of the Rope” simply seethes and breeds pestilence, the dank and pulsating angles of “The Failure King” and “Dead Rat Rotting Raven” unearth some rather coarse riffing that instantly charms.

Album closer “Solace Eclipsed,” much like “A Light That Doesn’t Yield” from Clawing Into Black Sun, emerges as the highlight here, featuring a steady dose of climatic, atmospheric guitars and Clemans’s underrated clean vocals. A fitting cap to what is largely a scathing, highly engaging album, Wolvhammer continue to hold serve as one of America’s best black metal bands, of any variety.