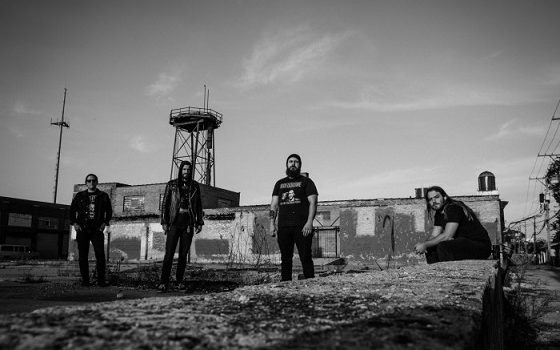 Two months separate the release of Wolvhammer’s The Monuments of Ash & Bone and Skeletonwitch’s Devouring Radiant Line. The one common denominator? Vocalist Adam Clemans. While Wolvhammer is the band Clemans helped start and has long been known for, his work with Skeletonwitch has introduced the man’s snarl to a much wider audience. But, here and now, Wolvhammer is the point of discussion and their excellent new The Monuments of Ash & Bone, the first release in four years. As Clemans notes below, black metal remains at the band’s core, but don’t sleep on their pervasive sludge and atmospheric elements, both of which make Monuments Wolvhammer’s best (and most enduring) effort to date. Therefore, Clemans gives us the scoop…

Dead Rhetoric: You played a fair amount of shows in support of Crawling into Black Sun. What did you learn about Wolvhammer during that time?

Adam Clemans: More than anything I began to notice how much stronger we were becoming as a live entity. Wolvhammer is a very primal experience for me and that touring cycle fed my mind with the potential to make something even stronger.

Dead Rhetoric: How are you managing your schedule between Wolvhammer and Skeletonwitch? With both bands having new albums out, you are going to be a busy guy…

Clemans: It is definitely not easy trying to balance both as scheduling tours has become more difficult. However, I’m very content with how things have been going. I was able to release two albums that I’m very proud of, in the same year.

Dead Rhetoric: Along the way, you lost but picked up a few new members. What have these guys brought to the band?

Clemans: Our current lineup is the most solid we have had, for sure. Garry [Naples] is an excellent and aggressive drummer which is exactly what we have needed for years. [Andrew] Gerrity [bass] has been a close associate of the band for years so he was a natural fit as well.

Dead Rhetoric: What led you to sign with Blood Music? They’re somewhat selective with who they sign…

Clemans: Initially we were planning to self-release the album but Blood Music expressed interest and I have respect for their catalog and thought it would be an interesting fit.

Dead Rhetoric: As for The Monuments of Ash & Bone, what was the approach going in? It feels like the natural successor to Black Sun.

Clemans: Jeff [Wilson, guitar] and I talked a lot about want Monuments to encompass everything that the band has done to date. I wanted it to be a little bit of a throwback to the dirtier punk roots of the band while still maintaining or love of death rock/goth music. We wanted to create something that grabs the throat and doesn’t let go.

Dead Rhetoric: “Solace Eclipsed” is simply brilliant and the perfect way to close the album. How did that one come together?

Clemans: “Solace” was one of the tracks that kind of came together last minute in the studio. Working with Jeff is so natural for me so we are able to bounce ideas and formulate stuff fairly quickly. He always seems to write very moody album closers, so once he showed me the main riff and we discussed how to build tension around it, we just went with it.

Dead Rhetoric: Would you like to do more actual singing in the future?

Clemans: Doing “clean” vocals is definitely something I don’t intend to do unless it seems fitting for the part/song. Jeff and I listen to tons of stuff that is more in that vein so it tends to boil to the surface on some songs.

Dead Rhetoric: You’ve long been associated with American black metal, but, it appears you’re somewhat outside of that subgenre now. What’s your take?

Clemans: I consider Wolvhammer to be, at its core, a black metal band but we definitely just write what we like.

Clemans: Tour, tour, tour. Jeff has also started to write material for the next record as well.