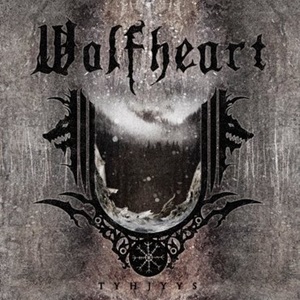 The Finnish word for ‘emptiness’, Wolfheart’s third studio platter Tyhjyys continues the quest to reach the deepest, darkest, and emotional recesses of the quartet – as vocalist/guitarist Tuomas Saukkonen and company display throughout their melodic death metal career. Building from a one-man operation for the Winterborn debut and quickly assembling the ideal lineup for the follow up Shadow World in 2015, the band’s touring and festival appearances (Summer Breeze a favorite German destination for these musicians) add to their appeal as we don’t expect any sort of commercial-laden songwriting maneuvers. For the melodies of Wolfheart come naturally, while the aggression, heaviness, and atmosphere speak to the depths of despair, anguish, and the beauty within one’s embodiment of winter, nature, and environment.

Contrasts shape the Wolfheart approach – unafraid to burst into a relentless black metal trilling riff with blasting tempos in one measure of “Boneyard”, then drop things into a somber doom-oriented groove the next as the almost eight-minute arrangement hypnotizes the listener into an altered universe state. Drummer Joonas Kauppinen slays at almost any tempo – comfortably shifting between hundreds of beats per minute measures and then laying back into a normal metal veneer which makes “The Rift” one of his highlight reels. Cultural textures from their homeland creep into many chord sequences and riff combinations – check out the swirling guitars for “Call of the Winter” that echo around Tuomas’ deep growls and almost-tribal like double kick hits, plus an intriguing acoustic instrumental sequence that evolves into orchestration fit for the Middle Ages. The title cut ends things on a beautiful, doom-laden note – lurching guitars and keyboard/bass supplementation that digs deep into the recesses of winter even with the fleet flurry of notes lead guitarist Mika Lammassaari whirls about.

Trusting instincts makes Tyhjyys another potent record for those who love melodic death metal that can convey a wider prism of emotional magnitude – channeling raw feelings and deep-seeded memories into sonic totality. Let’s hope the sales-figures and interest can finally gain Wolfheart some North American tour action – their talent needs to be heard on loud stages from coast to coast.