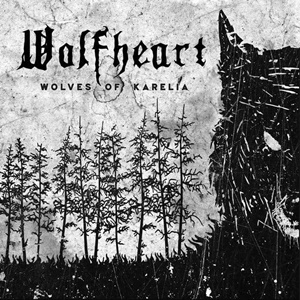 Productivity emanates from the work of Finnish extreme metal band Wolfheart. Vocalist/ guitarist Tuomas Saukkonen leads the quartet from a melodic death/blackened platform – arriving already at their fifth studio record for Wolves of Karelia. A conceptual record based on the Finnish army winning against a superior Russian military during the late 1930’s into the start of World War II, the courage and vigor of the primal battles definitely matches the intensity and delivery for the band on all levels. Through these eight tracks you can expect some of the most savage riffs, impassioned dark vocals, and tantalizing melodic runs that take winter metal to that next level.

When you have some songs reaching 260 BPM in tempos and tremolo picking of the blackest degree, it’s hard not to feel your chest pumping and adrenaline rushing to every fiber of your being – and yet Wolfheart never forsake the outside key elements of orchestration or catchy cultural, epic refrains that suck you back into the movement at hand. The latest second guitarist Vagelis Karzis peels off serious leads that are intoxicating, alluring, and very memorable – register opening single “Hail of Steel” during its conclusion and the shapeshifting headcrusher “The Hammer” as two standouts for his intricacy, composure, and tastefulness. The piano and acoustic-oriented “Eye of the Storm” serves as a nice mid-piece interlude, a haunting, simplistic effort in under three minutes that slowly incorporates more circular musical movements layered on top of one another. The record as a whole definitely see these musicians wanting to push the boundaries of speed and intensity to the utmost level, but there is also a track like “Born from Fire” that is melodic death nirvana, some of the bouncy guitars working in tandem to the powerful rhythmic tempo, volleying and thrusting as engaged soldiers marching forward to conquer their territory. By the time “Ashes” finishes the record with another calmer acoustic/orchestration treatment building out into this electric, headbanging piece de excellence, you feel content that Wolfheart are indeed masters of their domain.

Desiring to prove that you can be memorable even at faster speeds while also injecting the right amount of mid-tempo heaviness when called for, Wolves of Karelia keeps the band top of mind for melodic death/blackened metal – and proves why Finland is one of the best countries to deliver this style to an international landscape.