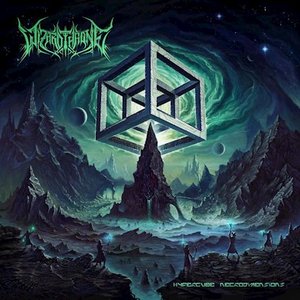 A joint effort between members of Alestorm, Gloryhammer, Aether Realm and more – on top of guest appearances with members from Swallow the Sun, Dark Fortress, and Wilderun – means that this is going to be some top level stuff (and thus some lofty expectations). Wizardthrone was born from a desire to play some symphonic extreme metal, merging technical death metal, black metal, as well as some power metal as well. Hypercube Necrodimensions manages to pull off this grand notion with ease, and serves as proof that this particular style still has some legs.

Given some of the band members involved, don’t go into this thinking it is going to be a goofy, joke type of act. Wizardthrone is deadly serious in their musicianship, and opener “Black Hole Quantum Thermodynamics” doesn’t take long for the listener to pick up on this fact. Triumphant and exquisite soloing, bombastic and towering synths (that still give the riffs plenty of room), scorching vocals, and some intricate yet hard-hitting riffs instantly grab the listener and pull them into the band’s world. The sympho-black influences can be more pronounced in particular tracks (“Frozen Winds of Thyraxia” has its fair share of cold riffs and blasts), upbeat power metal influences (the bouncy synths of “Forbidden Equations Deep Within the Epimethean Wars”), and vicious death/thrash melodies (the title track) make sure the band isn’t repeating themselves throughout. It’s also wise to note that outside of the gargantuan and suitably epic closing track “Beyond the Wizardthrone” (an effective culminating piece), the band keeps it short and sweet. There’s no over-reaching tracks that meander amid the symphonic landscapes, which is a frequent problem for some bands, and the songwriting is tight and focused on serving the song – even with some of the technical guitarwork at hand.

Hypercube Necrodimensions is an album that thrives off the interplay between genres and cinematic soundscapes. The band pulls from the biggest influences from this genre, both present and past, and fine-tunes it into a glorious sounding extreme symphony. Thrilling, diverse, while being just as technically driven as one could expect.