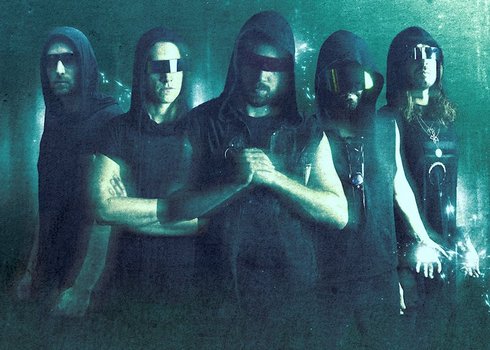 What ever happened to that intriguing combination of raging fury, bombastic keyboards, and elegant melodies that defined the early 2000s, particularly in black and death metal? A question that some tend to ponder, and certainly the members of Wizardthrone did the same – a group composed of Gloryhammer, Alestorm, Aether Realm, and Necrogoblikon members. So instead of wondering where it went, they decided to tackle making their own version of it, and thus Wizardthrone was born. Their Napalm records debut, Hypercube Necrodimensions, takes the best elements from that period while injecting it with some new flash. We caught up with guitarist Myk Barber [M. Archistrategos Barber] to get the details on the formation, inspiration, and even where the band tends to head next.

Dead Rhetoric: What appealed to you about Wizardthrone?

Myk Barber: We grew up listening to extreme metal when we were younger. We really just wanted to get back into those records and make something like the music we listened to when we were teenagers. That was really the inspiration behind the band.

Dead Rhetoric: Were there any bands that were a specific inspiration to starting this?

Barber: For me, it was a lot of the late ‘90s/early 2000’s melodic black and death metal bands. Early Children of Bodom, Old Man’s Child, Emperor, Dissection, and even some older power metal bands like Lost Horizon. They had some really crazy lyrics and keyboard sounds. Chris [Bowes] is super into Bal-Sagoth. They were a major influence, especially on the lyrics and the keyboard composition. No one really plays that style anymore, so we figured that someone has to.

Dead Rhetoric: It does have that turn of the century feel to it. I’m not sure when that sound ended, but it definitely has gone away.

Barber: I think it was like pre-In Flames turning into a nu-metal band [laughs], or something like that.

Dead Rhetoric: What do you feel is the goal of the band?

Barber: Really, at the beginning of last year we found ourselves with cancelled tours and an unknown amount of time. Chris and I had been talking about doing something like this for a while. Eric [Brown], the drummer, and I had been on tour for maybe 2 weeks when Wizardthrone took off. We had been joking about doing some sort of death metal project. Chris had been speaking with Jake from Aether Realm at the same time, separately from myself and Eric – so initially it was just having the time and seeing what happens. We wrote three songs and we felt it was really easy for us to write in this style and make good songs. We sent them to Napalm to see if they were interested, and they were, so we tried to figure out how to make this an actual band.

Right now, we are just focusing on the album promotion but we are already speaking to an agent about playing some live shows once we finish playing catch up with our other bands. We have a year’s worth of shows to catch up on, but we are going to try to squeeze things in maybe next year. So to answer the question properly, we are just trying to be a band playing this type of music, as we said, no one is doing it anymore so that’s our real goal.

Dead Rhetoric: So is this one of those things that if it hadn’t been for the pandemic, it wouldn’t have gotten off the ground at this point?

Barber: It may have taken longer. I started writing the first song before the pandemic. I had came home and was bored so I started writing. I don’t think we thought we would be in this situation a year later. We thought that by the end of last year, things would be back to normal. But I think it would have happened eventually. The positive was that we were all stuck at home with nothing to do, so we were locked away and forced to work on music every day. So the songwriting came together insanely quickly since there was nothing else to do.

Dead Rhetoric: What do you feel separates Wizardthrone from the other bands you are all involved in – what’s similar about it?

Barber: I can only really speak for myself and Chris, because I know him the best but it’s separate from Gloryhammer. The musical style is completely different. Gloryhammer relies on the big, overarching storyline. Wizardthrone doesn’t have that same universe. It is in its own universe, but there’s no big plot storyline – it’s more loosely…I’ve tried to compare it to Immortal, where they had their own world but they weren’t really telling a story. But everything was set in the universe. Musically, it’s a lot more aggressive and technical than Gloryhammer and Alestorm. We weren’t really trying to focus on hits, it was more about how can we keep the songwriting style that we have and apply it to something that’s more aggressive.

Dead Rhetoric: Could you discuss the sci-fi influences and universe of the album?

Barber: When I wrote the first track and sent it to Chris, he actually had these lyrics sitting around from when he was like 19 or 20 and he had studied high mathematics at university. I had said that we needed a name and a theme. With extreme metal, a lot of the same topics get reused, and we needed to be different. So he sent those lyrics and they were absolutely perfect. We had to change a couple of words but it fit the music straight away. So we tried to write another song to see what would happen. The first song was the title track and it was all mathematics, which we released as a single. The second song had this sci-fi theme, which we started writing about space ships and an ancient tome traveling through space. Referencing Bal-Sagoth, but also some tech death bands like Obscura. We just started playing around a bit. Once we had like 2-3 songs, we decided that would be the direction of the rest of the album.

Dead Rhetoric: Could you talk about the 13-minute track “Beyond the Wizardthrone” in particular?

Barber: That was also the last song that we wrote, though I had the idea of having a huge, 5-movement song to end the album with. We held off writing it because we knew it would be a big pain in the ass. But we finished the rest of the album and it was time – the song went through two different forms and the first one was even more insane. It was going to be about the Mayan apocalypse and volcanoes – it was kind of stupid. It was something more like what Gloryhammer would do, and thankfully Chris caught it and decided it was a terrible idea. So we started over from scratch. I sat down and composed the introduction with the organ building into a classical prelude and everyone thought it sounded better than the first version, which was a lot of tribal drums and things like that.

As the song got longer, we realized that you can stay on one style for only so long while keeping it interesting, so we have more aggressive parts that have been condensed into one movement and then there is a super melodic power metal section, and then it begins to follow the lyrics where it gets a bit strange and more progressive and eventually concludes with a burst of drums and blastbeats with crazy synthesizers and mad shit. The final movement, this slow ambient part, had originally been written by Jake. It didn’t really fit a different track, but it was a nice idea so we held onto it and we got to the final chorus of “Beyond the Wizardthrone” and we couldn’t figure out where to go so it was suggested to place Jake’s riff there. It sounded quite different from the rest of the album, but because the lyrics are about a guy asking for forbidden knowledge and he’s taking hallucinogenic drugs to look within himself to realize his answer. He finds it and the whole universe blows up – it made for a really good final section.

Dead Rhetoric: With the other songs being much shorter, what’s important in keeping symphonic extreme metal from being too bombastic and over the top? I think you have nailed that epic feeling without being too far over the top.

Barber: I used to write in this style, and along with Chris in Gloryhammer. Everything I had written in this style, the shortest song was like 7 minutes long. They were winding – good ideas but they tended to dwindle on. Having learned from hanging out with Chris and hanging out in Gloryhammer for a while, you get to see the crowd reactions. The major issue with a lot of this music is that it doesn’t go anywhere. It’s lacking in concise songwriting. Like I said at the beginning of the interview, we tried to apply what we learned from Gloryhammer and Alestorm, and tried to apply it to this more obnoxious music and see what works. One thing I always enjoyed about Children of Bodom, there was a lot going on and they would change styles every other riff, but somehow it would be kept in this 3.5 minute song and had short albums. They left you wanting more instead of feeling like something was amazing but you don’t want to listen to it because it’s too much. I think Old Man’s Child was really good at that too. They just wrote catchy songs.

Dead Rhetoric: Thinking about those bands in that era, are the lengthy song titles a bit of an homage?

Barber: Yeah, I think one of them, “The Coalescence of Nine Stars in the System Once Known as Markarian-231,” and maybe several more – that was the first song title I wrote like that and it was almost a joke because Eric said that we needed song titles like Nile. Twenty-minute long song titles for a two minute song. But then, it became more of a tip of the hat to Bal-Sagoth.

Dead Rhetoric: In the promo pic, is there a reason for the futuristic sunglasses across the board?

Barber: The visors? That was Chris [laughs]. From the beginning, he said he wanted to be one of these cool bands that all wear black hoodies and I said that it was already a dead trend. So he suggested visors, and he talked about it for weeks. Then everyone said no, but he had bought the stuff online and we felt that it was a little bit different. There’s no meaning behind it. The original picture we had, during the pandemic, we had sent selfies to an artist and he painted this digital picture, which was cool, but it seemed more like Gloryhammer. We didn’t want to dress like wizards, or in this universe, a wizard could be a guy wearing a black hoodie and a visor [laughs].

Dead Rhetoric: Outside of the album, do you have plans for 2021?

Barber: We have the promotion for the album coming out, and we just finished shooting the final music video. Then we really have to start lining up shows for next year. We have already started writing material for the next release, since we aren’t entirely sure how long it will be before we play live. We figured it would be wise to get a few things ready to go while we can. But it’s only a few ideas at the moment. Outside of the band, I am recording an album with another band I am in called Deathcode Society, which should be really cool. It’s a really crazy, neo-classical black metal band. We are also working on the next Gloryhammer album as well. 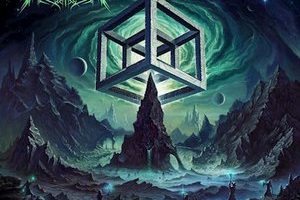