Winds of Plague – Against the World (Century Media Records) 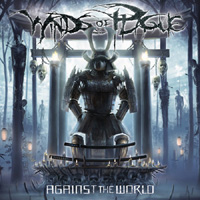 The bottom of the barrel has been scraped and broken through by Winds of Plague, who on their fourth album Against the World further accentuate the notion of just how pointless deathcore is. The band’s “symphonic” gang tackle of beatdowns and dumb-chugs allow for a brief (and partially welcome) respite from the chest-beating and empty bravado portrayed here, although by the fourth song, it was quite evident Winds of Plague don’t even have the capacity to put a fresh idea to tape.

Not lost here is singer Johnny Plague’s unintentionally comical “street” vocals, that sometimes hit upon the “Here we go! Here we go!” shouts of hip-hop artists, and extends into a brief rap before “California,” which includes the soon-to-be infamous line, “Winds of Plague still running shit, still on top!” Someone other than Plague uttered those lines (read: guest vocalists), but suffice it to say, rhetoric as this is usually passable on a Biohazard album, but not here. Such tactics are sure to get the cold shoulder from the regular death metal crowd, which at this point, WOP are probably avoiding like a high school bully.

Tons of boring guitar chug-a-lugs here, and the only saving grace (albeit a minute one) is on “Refined In the Fire,” where a Pantera-like rhythm gives the song a rare kick in the teeth. Hatebreed’s Jamey Jasta also gets in on the act during “Built For War” to numbing effect. Outside of that, the usual preponderance to rely on the beatdown and solely the beatdown is ultimately what makes Against the World a waste of time, and this doesn’t even count the band’s cover of “Zombie” from the Cranberries.

Hard to say who is worse: Winds of Plague or Suicide Silence. Unfortunately, both have given a new generation of kids the identifier for death metal, and while the damage while not irrevocable, it is unforgivable. How this shit manages to float is beyond comprehension. Here we go! Here we go!