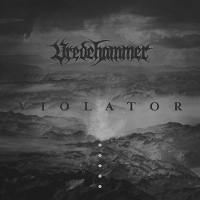 Leaving Abbath’s eponymous band to focus on your own group…that takes some guts. This was the case circa last December for guitarist Per Valla, who decided to leave the Abbath band to focus all of his attention on Vredehammer. It’s a good thing Vredehammer are as good as they are. If that weren’t the case, Mr. Valla could have ended up with some serious egg on his face. But to the matter at hand, Violator is Vredehammer’s second album, the follow-up to 2014’s Vinteroffer, which was so well-liked in Norway that it was up for the country’s version of the Grammy’s, otherwise known as the Spellman Awards.

Valla does most of the heavy lifting throughout Violator, handling all guitars and vocals. His vocal approach is worth mentioning, for instead of grappling with the classic Nordic forest croak, his vocals resemble that of one Randy Blythe from Lamb of God. (Seriously, how many times has Lamb of God been mentioned alongside a “true” Norwegian band?) However, Valla’s vocals are more discernable than not, adding a modern element to the blackened thrash proceedings.

And that’s largely where Vredehammer exists: in the boiling, quasi-technical fields of black-on-thrash. There is some amount of control to the band’s songs, as found on the whirling (and totally headbanging worthy) “Cyclone” or the pummeling “Deadfall.” In fact, it appears Vredehammer are more effective when operating at half-time tempos than at full-blast. This all comes to a head via the album’s closing number, “Blodhevn,” where at long last, some much-needed melodies are injected into the band’s sound. A fully robust and climatic song, “Blodhevn” puts an effective end-cap to seven songs with little, if any filler, and above all else, no foolin’ around. Now we see why Valla ditched Abbath for this…