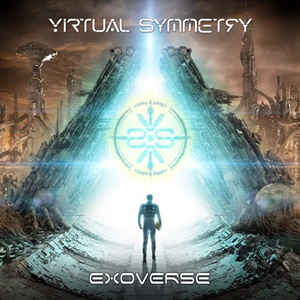 Ambitious is the Swiss-Italian progressive metal outfit Virtual Symmetry, releasing a full-on eight song concept record of their own accord with Exoverse, encompassing time travel and a hero’s journey of self-discovery that clocks in at a robust 75 minutes. Featuring two members of Temperance in vocalist Marco Pastorino and drummer Alfonso Mocerino, the conventional quintet also has guest support throughout from artists with ties to Dream Theater, Evergrey and even classical/gospel performers. Recording the album at Peter Gabriel’s Real World Studios in the UK adds another aspect to the robust, expansive nature of the songs and performances – so with lots to process and consume, time to delve in and see what’s represented for the aural output.

How you can tell this is a progressive metal outfit is the first vocal from Marco Pastorino heard on Exoverse takes place almost nine minutes into the album, following a 6:35 instrumental “Entropia” featuring Jordan Rudess’ keyboard excellence, which leads into the slow building “XI” at over ten-minutes that has a driving guitar platform, spacious keyboard support and solid Dream Theater-esque musical chops from all five musicians. Willing to balance out atmosphere, technique, and diversity all dependent on the needs/feel of a specific arrangement (or often dialing down to segments in a certain song), that’s why you’ll get saxophone and soprano support for “Remember”, the Nuvoices Project delivering gospel choir parts to the twenty-three minute (!!) closing title cut, and superior guest vocals from Tom S. Englund of Evergrey on standout “Exodus”. The overall twists and turns song to song do indeed make you feel like you are traversing a theater in the mind experience: bold symphonic orchestration giving chase to numerous heavier passages, or intricacies that can be fusion or rock-based. Guitarist Valerio Æsir Villa has a bevy of killer tricks and solid abilities behind his axe technique – setting up the soaring Marco Pasterino vocal melodies in an outer world experiential manner with occasional fusion/shred layers during another mid-album highlight “Vortex”.

Potentially Exoverse can be a polarizing effort, especially for those who struggle with the fact that three of the eight songs take up over 42 minutes of the playing time – you’ll need the patience and ability to absorb all the musical information over numerous passes. You’ll be genuinely rewarded though – as Virtual Symmetry live for adventurous progressive metal that doesn’t limit itself to technical prowess, concerned about injecting the right hooks, melodies, and mesmerizing performances in a dynamic manner. Everyone from symphonic/progressive metal mavens to even progressive rock or heavier bands like 90’s Metallica may find favor with this record.