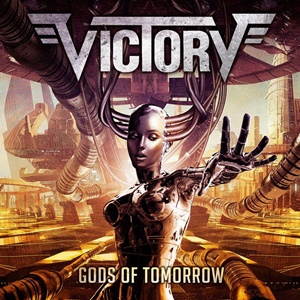 Active since the mid 1980’s when guitarist Herman Frank stepped away from Accept, Victory has been a melodic heavy metal staple in the European scene – although relegated to more of a cult status stateside due to lack of proper distribution/promotional channels. Gods of Tomorrow could change that, the eleventh studio album and their first record in a decade now being a part of the healthy AFM Records roster. Assembling a fresh lineup that includes guitarist Mike Pesin (involved in his solo records) plus others with ties to the active German metal scene, these thirteen tracks align with the band’s penchant for easily digestible power chord/riff combinations and undeniable catchy vocal melodies/choruses that activate the swinging fists, body shakes, and fervent audience response when blasting at peak volumes.

The main compositions possess bluesy-driven rhythms that gain proper support from a groove-based rhythm section and thoughtful, potent vocal delivery/ supporting harmonies – using the framework set about from various 70’s/80’s artists with NWOBHM/ hard rock influences. The Frank/Pesin axe tandem dance around bar-based metal boogie riffs for “Cut to the Bone”, using speedy licks and tricks to elevate the lead break around the in the pocket tempo bassist Malte Burkert and drummer Mike Stein lay down. Anthems like “Hold on To Me” and “On Fire” go down easy on initial exposure and cement themselves deep into the brain/body with subsequent exposures – the professionalism of vocalist Gianni Pontillo providing the extra icing on top due to his precise phrasing, bluesy edge, and piercing high inflections. Herman as a songwriter is always aware of diversity and dynamics key ingredients for successful longevity, so a more commercial offering like “Dying in Your Arms” has that arena-level charm between the clean/electric shifts and soothing verses to be a future fan favorite. Favorites shift day to day – many will appreciate the straight-ahead metal energy of “Into the Light” and “Rising Force”, but there’s also something punchy in the swagger and subtle ebb and flow between the circular bluesy riffs and bass/drum interplay for opener “Love & Hate”.

Victory sits in that category that straddles melodic hard rock and heavy metal that may not necessarily excite those seeking something fresh – but the familiarity should not dampen appeal, as this is a classic, foundational effort sure to go down a storm at festival settings. May we not have another ten years to wait for a follow-up.

Victory – Cutting Right to the Bone