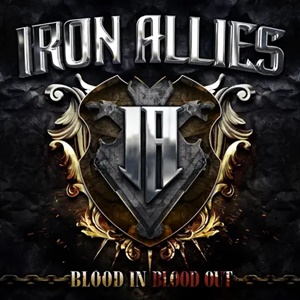 Anticipation hit peak levels upon announcements for well over a year at the union of two ex-Accept members forming a new outfit for Iron Allies. Not like we haven’t been hearing killer records as of late between Herman Frank on a solo basis (as well as Victory) or singer David Reece in that regard too. Yet finally hearing the results for this first salvo Blood In Blood Out, it’s quite evident that this traditional, classic metal output chock full of stirring anthems deserves praise, the supporting cast equal to the task of delivering tremendous performances.

Often referred to as ‘the riff-meister’, Herman has that intuitive knack for setting up each track in the best catchy context, chord combinations as well as subsequent supportive transitions, lead breaks or bits that drive fists high, elevating crowds to headbanging madness. Be it of the slower, churning variety for “Destroyers of the Night” that features 80’s-oriented bluesy charm and poignant, thoughtful lead play or the machine gun rhythm energy which rivals the thunderous Francesco Jovino’s double kick / fill mastery within “Evil the Gun”, Mr. Frank along with second guitarist Michael Pesin deliver a bevy of axe parts that cause goosebumps for days/weeks on end. David’s history and range as a singer all across the melodic hard rock/metal landscape is unquestionable as far as seasoning, professionalism, and passion – using his multi-octave skills not just to hit piercing highs, but also showcases charm in lower registers that allow “Martyrs Burn” and the Accept-esque “Nightmares in My Mind” to become two more highlights. The sequencing of the record isn’t front-loaded to the max with the heavier/speedier outings – another reason to really enjoy the album as you’ll hear some uplifting Judas Priest-esque material like “Truth Never Mattered” next to a sturdy, crunchy anthem for “We Are Legend (You and I)” as the final two cuts.

While there are many younger bands also putting their own spin on this tried and true formula, when it comes to trusting musicians who lived, breathed, and have been involved in this scene for over forty plus years – there’s no better source to believe than the originators, which is what we have here for Iron Allies. Blood In Blood Out is an international union that bleeds metal to the core, hopefully starting a serious string of new classics.

Behind Your Fear – Embrace the New Ways