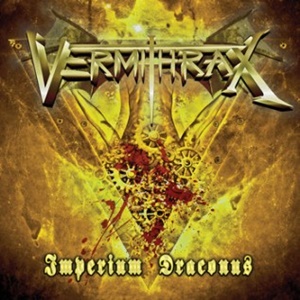 Privy to much of this material at various stages over the past five years or so, it’s finally nice to see Pittsburgh act Vermithrax get the chance to unleash their melodic power/progressive thrash sound to the masses through this full-length Imperium Draconis on Divebomb Records. Featuring veterans like CRoy (Reading Zero) on vocals and JR Jameson (Nunslaughter, Icarus Witch) on drums, plus guitarist Scott Haggerty and bassist Tom Donaldson who had ties to Order of Nine, their desire to deliver an amalgamation of their favorite styles from the late 80’s through late 90’s/early 2000’s musically into a modern age should be admired, as there aren’t many bands these days willing to fuse those elements together into a potent, powerful final product.

Opening with a brief 28 second acoustic intro “The Sacred Keys To…”, the opener “Enoch” builds through arpeggio-laden axe action in the Nevermore/Forbidden class, along with propulsive rhythm section action before the clear, commanding melodies of CRoy shatter the aural skyline. His voice at points traverses Warrel Dane against Russ Anderson territory, even showing vestiges of John Arch when necessary – metal to the bone throughout. Tipping a bit of the lyric cap to a much missed 90’s underground power metal favorite of the Boston area Lord Bane for “Crucified By Hate” (‘When Vermithrax meets the Lord of Bane/ And young men were Born to Die’), the main mid-tempo arrangement has those darker power riffs and slower, steady double bass hits and a quick bass spotlight that make the listener feel like they are preparing to march into war, circa early Metal Church but given a current production punch because of the mastering abilities of Chris ‘Zeus’ Harris (Nevermore, Iced Earth). Layers of guitar action provide plenty of circular body motion movement – Vermithrax knowing when to shift into overdrive and lay back into more of a solid Sabbath-type groove as “Road to Athkatla” illustrates.

Dynamics play a huge part in the appeal of this record – even at eight songs and just under 40 minutes, the quartet understand that you cannot stagnate in one specific tempo or set of riff patterns. When you want to hear and experience something balls to the wall in a pure thrash vein, “River Cruor” fits that bill, even as the tempo shifts into more progressive pastures with a solid lead component from Scott. Fantasy and reality lyrics switch up track to track – all handled from an intelligent perspective as the words matter just as much as the music on display. Closing with a fine Flotsam & Jetsam medley tribute in the form of “Hammerhead/ Hard on You” that switches back and forth and back in almost eight minutes, it’s clear that the future shines brightly for Vermithrax.

Veteran musicians deserve a proper chance to gain international support – because bands like Forbidden, Flotsam & Jetsam, Nevermore, Vicious Rumors, and Metal Church matter to many metalheads – and so should Vermithrax. Let’s hope for a productive, fruitful future for this amazing group. 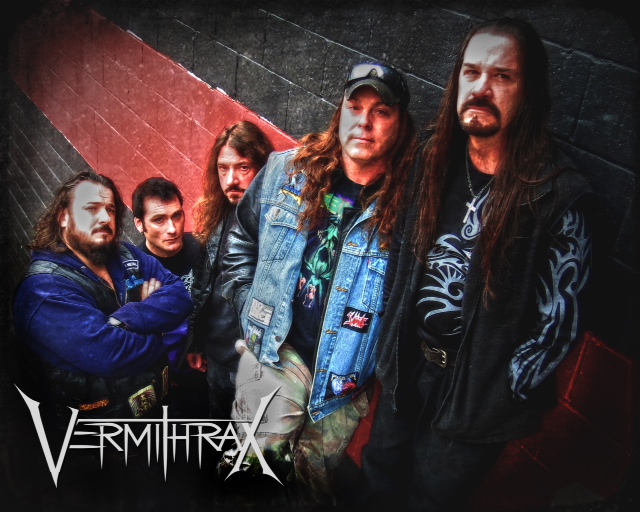