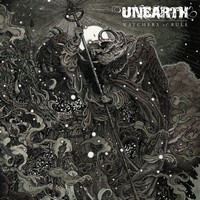 While many have noted that the “metalcore” movement has faded, one of its original masters is still standing strong. We are speaking of Unearth of course, who now have six full-length notches on their belt, and have never really bothered to attend to what the bucking trends happen to be and allowed it to influence their direction. If you’ve enjoyed Unearth in the past, you’ll be certain to enjoy this too.

While many bands have gotten softer, vanished from the radar, or just plain disbanded, Unearth are in top form on Watchers of Rule. Their bread and butter still happens to be the combination of Gothenburg-influenced melodic leads and riffs alongside burly hardcore-influenced breakdowns and they deliver the goods. There’s the catchy melodies of “Burial Lines,” the blasting opener “The Swarm” (not counting the intro), and neckbreaking riffs of “Never Cease” if you need some proof for yourself. Unearth has always been able to make their breakdowns count and avoid the trite and unnecessary as well, and the massive “Lifetime in Ruins” certainly keeps this tradition alive and the album is full of some heavy, punishing breakdowns. Unlike 2011’s Darkness in the Light, there’s nary a clean vocal to be found here, keeping the focus on the heavier end of the band and allowing the guitars to do most of the legwork (definitely not a bad thing).

While the formula hasn’t changed much from the usual, Watchers of Rule is another winner from the ever-consistent Unearth. They’ve managed to keep a sound that is distinctly their own, even throughout the years when everyone was trying to get a piece of the metalcore glory. Ultimately, there’s validity in the band’s long-term appeal. An album that simultaneously crushes and melodically inspires, this is Unearth firing on all cylinders.