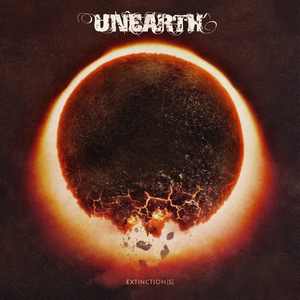 The long-time purveyors of combining metallic riffing with thunderous breakdowns, Unearth have had a few years between their last album, 2014’s Watchers of Rule, and now. But that time (mostly) spent on the road has done the band some good as heard on Extinction(s). While Unearth has been pretty consistent over the years, this is the most ferocious and inspired they’ve sounded in quite some time.

Sure, the Unearth formula of glorious, melodic death metal riffing with hardcore breakdowns is certainly present in the same form that you undoubtedly remember it, but in terms of execution there’s a fresh vitality and spark that gives the album quite an edge. The band wastes no time in getting to the finer points of their formula either. Both “Incinerate” and “Dust” kick things off with heavy bouts of monstrous riffs, grin-inducing melodies (of the ole Gothenburg variety), and of course, punishing breakdowns. There’s a level of refinement here, as the band seems to gravitate towards the early part of their career with the energy present, but haven’t forgotten the tricks that they have picked up along the way. Where some albums have been characterized by a few standouts (“Zombie Autopilot” or “The Charm” per say), the level of quality never seems to diminish here. Whether it’s a more violent and burly breakdown (“Survivalist” or “Sidewinder”) or gleaming melody (“Cultivation of Infection”), each track has its charm. Then there’s the closer “One With the Sun,” which takes the best of what the band has done and combines it all into arguably one of their strongest tracks in recent memory. Vocalist Trevor Phipps deserves some props here as well, with some of the most vocal variety seen from him on a release to date.

Extinction(s) is a fiery reminder of the potency of metalcore when it focuses on what works best without forcing in clichés. Unearth take their strengths of Gothenburg-ian melodies and hardcore brutality and use them to craft one of their strongest releases. Easily recommended to those who have stuck with the band over the years, as well as most modern metal fans.