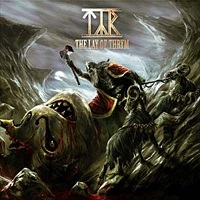 Sure, we have a total hard-on for Tyr, going all the way back to their killer Ragnarok album from 2006, but they’re an awfully easy band to like. With the imitable Heri Joensen leading the way with his triumphant, heroic vocals, Tyr is their own entity in the crowded-as-fuck epic/folk metal world, something that is proven yet again The Lay of Thrym, the band’s sixth album.

No real surprises here, as the band lays down a gauntlet is melodically-capable riffs, set to the tune of traditional Danish and Faroese Islands (Tyr’s homeland) songs. It’s a mini history lesson of sorts, if one is willing to pay attention. Nevertheless, the onslaught of opener “Flames of the Free” trickles down through the remainder of the album, including “Shadow of the Swastika” (“You can kiss my Scandinavian ass” is a killer line) and album highlight “Evening Star.” There’s just a surplus of good ideas here, as the band keeps the tempo tight, and Joensen does his thing with sing-a-long choruses.

“Take Your Tyrant” is single material if there ever was one, especially since it starts with the chorus (why more bands don’t do this is anyone’s guess). Some serious crunch is heard on “Fields of the Fallen,” while the gorgeous and jagged “Konning Hans” has a sea-faring feel, as Joensen sings in his native tongue. Closing things out is “Nine Worlds of Lore” and the title track, which sees the band wisely take cues from classic-era Borknagar by way of hushed acoustic and tension build-up.

Kudos to Tyr to not phoning this one in, something a few bands of their ilk can be accused of doing (what’s up Amon Amarth?). Rather, The Lay of Thrym is an agile, swords-to-the-air (but not to the gut – that would hurt) kind of album that is loaded with would-be anthems. Tyr are not a total revelation, but if there’s one band we’ll march into the epic/folk metal battle with, it’s the boys from the Faroese Islands.