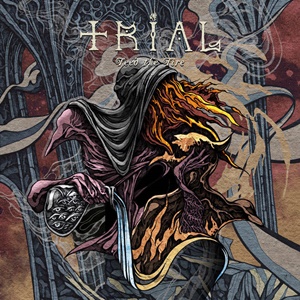 Previously spending a decade known as Trial, these Swedes added (Swe) to their moniker in 2017 as a difference maker to the other acts known as that common name over the years. Five years removed from that last album Motherless, in early 2021 they released a 7” single “Sisters of the Moon” consisting of two covers from Fleetwood Mac and Black Sabbath – an introduction to newest singer Arthur W. Andersson (ex-Air Raid). Which leads us into Feed the Fire, the fourth studio record from the quintet – a fiery outing sure to stoke the hearts of all traditional heavy metal maniacs.

Those worried about the band losing a tremendous singer in Linus Johansson should settle in adequately to the proper upper screams plus high note holding propensity within Arthur’s range. His high-pitch charm works in tandem with the fluid rhythms and twin harmony runs Alexander Ellström and Andreas Johnsson peel off to make “Thrice Great Path” an early highlight, reveling in aspects of early Nocturnal Rites and Wolf for comparisons sake. At other points, it’s very evident that the quintet professes strong progressive interplay characteristics that put 80’s Iron Maiden as well as Mercyful Fate on the metal map (check out the instrumental movements during “In the Highest” for exemplary guitar, bass, and drumming shifts). When taking the mood down to a broader, epic doom angle, the acoustic additions to the normal electric, distortion proceedings give “The Faustus Hood” an extra throwback, almost classical atmosphere. Saving the longest arrangement for the finale, “The Crystal Sea” contains everything ardent classic metal followers want in a nine-minute plus track: the captivating guitar hooks, dramatic vocal melodies, stirring lead breaks, plus a mysterious, circular instrumental conclusion.

Artist Costin Chioreanu continues to provide thought-provoking covers (he’s been a part of this process since 2015’s Vessel), taking on an oil painting/ vibrant animation vibe for Feed the Fire. Trial (Swe) proves once again why Scandinavian heavy metal remains strong this many decades away from its origins. Don the patch-filled denim jacket, bring all your friends together, as this record celebrates the wonder, energy, and excitement of the genre.