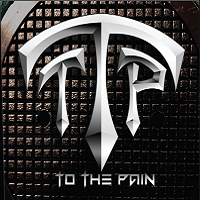 The last time To the Pain principles John Intagliata (vocals) and Steve Shaver (guitars) worked together was 1989, a robust 24 years. The pair were teenagers, probably sporting dirty mustaches, high-tops, and wavy hairlines that cut into mullet territory. Granted, this is pure speculation, but the sonic vacuum of their new self-titled effort suggests the duo (and rest of the band) would love nothing more than for time to have stood still.

The unfortunate consequence of trying to re-enter the metal field after such a long absence is that not every 80’s metal trick still works. Contrary to those from the aforementioned “old-school,” bands have figured out how to write songs without having to resort to tactics from three decades ago, our pals in metal and deathcore notwithstanding. Thus, To the Pain is positioned as a throwback to the times of yore with a mild modern influence, which to these ears, is undetectable.

Nevertheless, the standard songwriting format is employed through the album’s eight cuts, with Intagliata hitting the rafters on “For the People, Buy the People” (nothing like a good ‘ole play on words) and the doomy “The Smell of Sulfur/Rise of Demons.” The riffs aren’t anything to get amped about; they’re just a few steps below the plod of Crimson Glory or any number of C-grade thrash bands. But, as a do-it-yourself project released solely by the band, and with the dust kicked off a partnership that has been dormant for 24 years, To the Pain amounts to just a labor of love, looking to get some air-time. Nothing more, really.