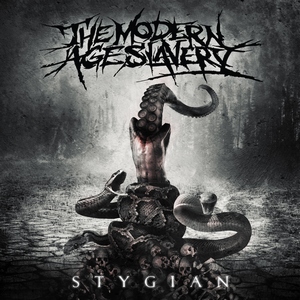 Seems like deathcore bands seem to take a beating most times from the truer-than-thou cult, but mostly for fair reason. When a band focuses on only one or two aspects (ie: being brutal, and tossing in breakdowns wherever they choose), they are working with a limited palette. It seems more in this genre should take notice to what The Modern Age Slavery is doing with their sound – one that’s rooted in deathcore, but not above (re)visiting some classic/modern death metal to give them a more refreshing, and vitalized sound.

In total fairness, the blend of many various elements makes it hard to really call Stygian a ‘deathcore’ release. There’s bits of straight death metal aggression and brutality, some bits of melody and progressive moments, blackened atmosphere, and chugging deathcore riffing. At times it almost sounds akin to what Hypocrisy could sound like if they went in a more modern and ‘core-influenced binge. It’s an abrasive approach, and comes off in a more complex and engaging manner than you might expect. A song like “A Place We Call Home” has some very visceral bark to it (some killer blackened blasts at times too), but it’s not without some underlying melodic structures and a solid solo to boot. Bits of groove a la “Regression Through Unlearning” also help to spruce things up with some guitar hooks that don’t take long to embed themselves in your brain. Chugging riffs still manage to play their part, but feel more integrated into the band’s sound, and they don’t have to rely on them as their main selling point.

The Modern Age Slavery are onto something with Stygian. It’s a rapid-fire 32-minute assault that melds together a myriad of different extreme elements into one cohesive package. Some further developments with album number five could make it into a real monster.