Modern death metal is one that has come in many flavors. Bands not content to simply repeat the past maneuvers of the bands preceding them, some have taken elements from many genres in order to find a style that best suits them – paying homage to the past while looking to the future. One such rising act within the extreme scene is Italy’s The Modern Age Slavery, who have been carving their own path of brutality for the past 10 years, spanning three full-length releases.

The band’s latest, Stygian, sees them further crafting more influences and elements into their sound. Explosive brutality that has a modern edge, yet still embodies the spirit of classic death metal. An effective dose of adrenaline, but retaining some melodic sensibilities. We fired off some questions to bassist Mirco Bennati to get a better grasp of the band, from their name to their latest album, as well as the detriments of being labeled as a particular sound when you are trying to reel in a myriad of influences.

Dead Rhetoric: What does the name The Modern Age Slavery represent?

Mirco Bennati: It’s a human condition that man passed in every era of its life; it has changed over the years but still today men are slaves, now it’s just less visible than in the past. It’s a sad concept but also a true one.

Dead Rhetoric: What’s the band been up to in between 2013’s Requiem for Us All and now?

Bennati: As you may be aware, during the last year and a half we changed two members in the band and that of course took some time in order to restore the band and bring it to a perfectly working machine. We had to test the line up live. Immediately after the first gigs we had the right flow so we started writing the new material. Still, while writing, we did a Ukrainian tour in February this year and we also co-headlined the Metalcon Fest 2017 with Ingested. In late May we finished the songwriting and started the recordings of Stygian.

Dead Rhetoric: How do you feel that The Modern Age Slavery has stepped up their game with Stygian?

Bennati: We’re actually pretty satisfied of the result of this album musically speaking, but there’s no room for complacency. We want the live set the recreate the sound of Stygian in the best way possible together with our old songs, so we are working hard to deliver a great show on stage. There’s no rest, we also started writing some new draft material.

Dead Rhetoric: You replaced a drummer and guitarist last year. What do Federico Leone and Ludovico Cioffi bring to the band?

Bennati: They brought fresh air into the band, something we really needed; it was like a new lifeblood for the others who remained. Both are extremely prepared as musicians, brought different ideas due to their different musical tastes and they have perfectly melted in our previous sound. They also both are wonderful people, funny and easy going, so we really have a good time when together. We couldn’t ask for better!

Dead Rhetoric: There’s a wide variety of influences on Stygian. Is it detrimental for the band to get lumped into a particular category by listeners?

Bennati: We’re glad you asked this. You know, looking at some of the first reviews and comments on the new songs we found disappointment because of the label “deathcore” that’s following us. TMAS had some deathcore structures in the past, especially on the first record Damned To Blindness, but those were already way less present in Requiem For Us All. In Stygian, maybe some breakdowns can recall deathcore, but still as you said this album has wide variety of influences that make it hard to label. We would love to have people having a first listening experience without any preconceptions.

Dead Rhetoric: You’ve toured with some very high-caliber acts in recent years. Have you learned anything for either the road or studio from these experiences?

Bennati: Yep, that we’ll never be able to drink as much beer as they do [laughs]! Just joking of course, something we surely learned is that even at their level it is very important to enjoy the moments, having a good time, because that’s their job and as any other jobs you need to find the good parts in it. Touring life is not easy. Of course seeing such great musicians on stage always teaches something, may it be presence or technique.

Dead Rhetoric: There are a number of different pre-order options for Stygian. How important is merch at this point, in regards to keeping the band running?

Bennati: Merchandise is fundamental because it helps the band finance itself and at the same time is one of the best ways to have people remembering the band, promoting the band on the streets with the t-shirts, to have something that connects the fan to TMAS. If you put out good music with a good looking artwork fans will tell their friends and will have something physical to show to them. This has a greater effect on a possible new fan, better than just a virtual like on Facebook.

Dead Rhetoric: What are some of the tougher aspects of trying to grow a metal band in today’s scene?

Bennati: Probably trying to be active in every field and succeeding with fresh ideas that the market hasn’t seen yet. Hard but hopefully not impossible.

Dead Rhetoric: When writing extreme metal, what do you think are the most important aspects to keep in mind?

Bennati: It may seem a paradox but for us melody has an important role in our songwriting. The aim is to create that catchy but still heavy riff or vocal line with the right melody that listeners will be able to sing. Also, we always try to imagine how the parts will come out during live acts and according to that we define everything else.

Dead Rhetoric: We are almost at the end of the year, did you have any 2017 releases that you particularly enjoyed?

Bennati: Well for sure latest Thy Art Is Murder, Black Dahlia Murder and also Carnifex, just to name the first that pop to mind.

Dead Rhetoric: Finally, what are your plans for 2018?

Bennati: Playing, playing, playing and if there’s time left, playing! We want to be supporting STYIGIAN live in as many countries as possible! \m/ 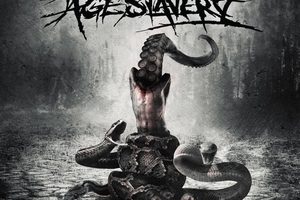