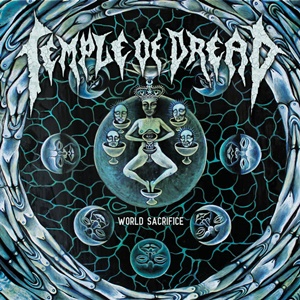 The resurgence of old school death metal should not be surprising given the reissue mania certain acts gained from those early years – plus new bands putting their stamp on the movement. Add German trio Temple of Dread to that list of purveyors wanting to crush souls through ripping tunes on their second full-length World Sacrifice. Quickly following up their 2019 Blood Craving Mantas debut effort, you’ll get eight originals plus a special cover to one of their domestic heroes that prove European death metal has that proper mix of mechanics, song structure, and solid musicianship that pushes catchy qualities over technical prowess or unnecessary intricacies.

The tones and attack of guitarist/bassist Markus Bünnemeyer along with the pummeling, frantic thrash meets death nature of drummer Jörg Uken allows tracks like “Symbiotic Delusion” and “Dedication” to possess layers of Kreator/Slayer meets Benediction, Cancer, and Pestilence propulsion. Spiderweb-like trilling against tempos that can be steady and pounding one measure, then off to the death races the next, along with the added church bells or atmospheric whistles to convey more haunting ambiance – although some of the lead breaks feature wild sequences of note flurries often diverting from the main hooks. Most will recognize the shrill, chilling rasp Jens Finger executes through his voice – Chuck Schuldiner (Death) courses through his phrasing and drawn out growls/screams for the title track and “Alive I Rot”. Tackling Morgoth’s “Sold Baptism” from their 1991 album Cursed, the tribute is fitting given Temple of Dread’s appreciation for German death beyond their UK and US influences. What’s most interesting is the cover art – it’s quite mesmerizing and not in a ‘brutal’ way, which probably will lead to a bit of water cooler talk over the band’s old school death stance not being portrayed as such here.

Executing a very focused, tight record in under 40 minutes – World Sacrifice isn’t going to rewrite what’s already been done in the early death days. Instead these guys revel in bringing those 1991-1994 years to a present generation – and should keep the genre kicking as a steady force within the underground. 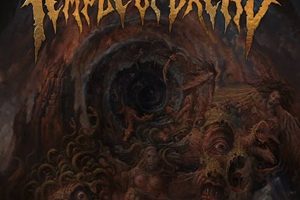