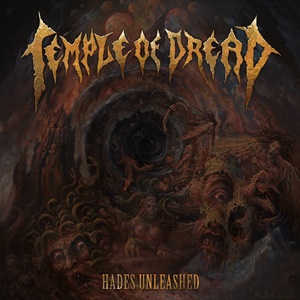 Three albums in three years – not the norm in today’s metal scene, but a welcome sight for German death metallers Temple of Dread. Gaining acclaim for their previous two outings Blood Craving Mantras and World Sacrifice, the trio continues forward with Hades Unleashed to add to their aural arsenal through nine pummeling tracks of old-school oriented performances, taking inspiration from the Florida, UK and Swedish scenes beyond the German historical factor to create crushing compositions. Swirling low-tuned riffs with energetic drumming, solid transitions, and evil growling vocals keeps everyone on attentive listener mode – especially for those who love acts like early Death, Grave, Cancer, and Morgoth.

From one cut to the next you can hear these musicians go from turning on the afterburners and occasionally throwing down a furious blast beat section into a slow, churning death crawl that still presents an evil atmosphere through acidic roars, lower/darker note choices, and brutal tones captured in a lively fashion by drummer Jörg Uken in his own Soundlodge Studio. Handling guitars and bass Markus Bünnemeyer matches up the layers of buzzsaw axe activities and low-end throttle with savory slices of aggression and earworms – the smaller guitar melody accents for “Empyrean” or gargantuan rhythms during “Necromanteion” two excellent samples of his professionalism. D-beat mechanics take “Crypts of the Gorgon” into early 90’s territory, reminding people the infusion of punk/grind aesthetics into the death mold can create diverse appeal, especially when the arrangement takes on a doom/tribal-like transition that should send audiences abuzz when airing this live. The measured words and raspy growls from vocalist Jens Finger takes on a mix of Chuck/Death during his Leprosy/ Spiritual Healing days as well as a slight Grave/Morgoth presence – unmistakable as the x factor for conviction during “Nefarious, I” as well as “Aithon’s Hunger”.

A tried and true style never goes out of fashion if the right tools, passion, and product come together in the right way. Hades Unleashed as the third Temple of Dread record delivers on all fronts – these Germans creating solid material that keeps the death metal movement thriving. 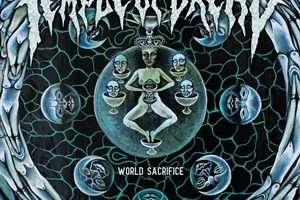