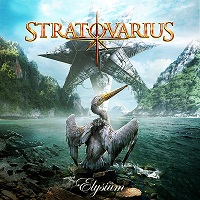 Not a whole lot of fuss around this one, primarily because Strato’s “comeback” album Polaris has come and gone without the apropos drama

now that founder Timo Tolkki (and noted headcase) is well out of the picture. Flying underneath the radar might have worked in the band’s favor, as Elysium is far and away the best thing the Finns have done since 2000’s Infinite, and if we want to get generous, it grazes 1997’s awesome Visions.

There is absolutely no wiggle-room for Stratovarius – they can only do basically two things well, which are the up-tempo, double-bass-happy power metal anthems, and the anthemic PM rocker, and lead single/album opener “Darkest Hours” is just that. It’s essentially this album’s version of “Hunting High and Low” (from Infinite), but is insanely catchy, with singer Timo Kotipelto belting out his patented array of yelps. “Under Flaming Skies” displays the band’s renowned penchant for flashy leads (and more double-bass), while “The Game

Never Ends” is a Jens Johansson-penned jam that flourishes with a king-sized chorus.

Misfires were expected, and they come in the form of the clunky “Lifetime In A Moment” and portions of the 18-minute title track that sound like Heart’s “How Can I Get You Alone.” Interesting. Nevertheless, the ballad “Move the Mountain” is heartwarming, and the lead trade-offs between Johansson and semi-new guitarist Matias Kupiainen during “Infernal Maze” are doubly adventurous.

Because expectations were so tempered for Elysium, perhaps that is the reason why the album functions at a much higher level than the band’s recent output. Granted, basically anyone could top the disasters that were the Elementsalbums and 2005’s self-titled affair, but Stratovarius haven’t sounded this focused and on-point since they seemed poised to overtake the melodic metal world over a decade ago.

Stratovarius – Stepping Up the Game