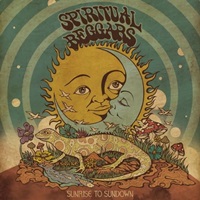 Retro/throwback hard rock seems to be all the rage these days – and yet we forget acts such as Sweden’s Spiritual Beggars felt comfortable developing their take on this scene back in 1992 when grunge/alternative music took over major media, with a debut self-titled record hitting the streets in 1994. Obviously see-sawing between Michael and Sharlee’s Arch Enemy workload which sustains their current livelihood (although Ludwig’s work in Grand Magus is gaining steam), we’ve been fortunate to see nine studio platters in the SB discography as Sunrise to Sundown represents the latest.

The psychedelic cover painting from Costin Chioreanu (At The Gates, Arcturus) will give vinyl lovers hours of intense study between sun, moon, birds, fish, lizards, flowers, grass and colors. Rest assured, Spiritual Beggars remain steadfast on their ‘real music by real musicians’ credo. A love of Deep Purple shines on “Diamond Under Pressure”, Amott’s lead break and Per Wiberg’s organ runs a testament to the influence of the Blackmore/Lord combination. The main music hooks shimmer and shine as the rhythm section accentuates the grooves, check out the sultry stoner doom swinging “Lonely Freedom” and beefier, up-tempo “What Doesn’t Kill You” from killer fill accents and strong bass supplementation.

Singer extraordinaire Apollo Papathanasio (ex-Firewind) has taken the vocal duties for Spiritual Beggars since 2010’s Return to Zero – the man’s natural proclivity to 70’s music because of his bluesy register a match made in stoner heaven. Check out the rollicking title track or the rhythmically tribal-driven “I Turn to Stone” for slithering versatility that rivals the greats from Dio to Gillian, Coverdale to the late David Byron of early Uriah Heep. Keeping measure tight, the quintet keeps three-four chords per arrangement top of mind and build on those through shifting accents – never letting the jam aspect go bombastic.

This is a logical follow up to their last platter Earth Blues – especially if you miss the early Blackmore-Gillan days of Deep Purple that launched the group into the hearts and minds of hard rock fans globally. Don the faded denim, grab your psychedelic bandanas and bathe in primitive old school bluesy/stoner rock/metal ecstasy.