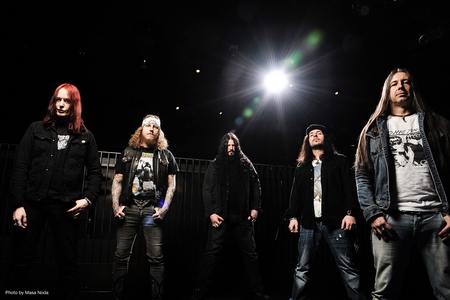 Rare is the opportunity to be able to have two diverse acts with a twenty year plus history as guitarist Michael Amott currently has with melodic death metal veterans Arch Enemy and his stoner hard rock/metal side band Spiritual Beggars still thriving. Especially grateful in this day and age where people have millions of choices at their disposal, it’s not easy to sustain a career solely off your recording/touring ventures, the man truly is passionate about his craft, his songwriting, and his performances.

The latest Spiritual Beggars studio record Sunrise to Sundown contains all the bluesy hallmarks one would expect from a band that worships at the altar of Black Sabbath, Deep Purple and others of that 70’s cloth. Channeling a lot of the members’ early exposure to the genre through their own musical development, these veterans of the scene (members with ties to Opeth, Grand Magus, and Arch Enemy bassist Sharlee D’Angelo are also in Spiritual Beggars) prove that there’s something to be said for age and wisdom when it comes to any throwback, roots oriented style.

So 18 years after my last talk with Michael (the Stigmata album for a newsprint fanzine called Spectrum) it was nice to catch up and find out all about the goings on within Spiritual Beggars – as well as extend into some Arch Enemy territory from time to time. You’ll also discover his love for their current vocalist Apollo (‘the Greek’ as he references at the end of our talk), and I learned that the man has probably played the Worcester Palladium with Arch Enemy more times than he’s played Stockholm, Sweden (15 times to his recollection). Read on… whether at sunrise or sundown.

Dead Rhetoric: Sunrise to Sundown is the ninth studio album for Spiritual Beggars. Did you ever imagine twenty plus years down the road that you would sustain two bands for so long with SB and Arch Enemy – enough to keep coming up with fresh songs for both?

Michael Amott: No, I’ve never really thought about stuff like that. I’m kind of surprised how much music there is that I’ve been a part of. I don’t know if I’m surprised, I just have never really thought about that really at all. I’ve always admired bands that have had longevity, that’s always something that I’ve looked up to, so it’s great now to be a part of that club.

Dead Rhetoric: Is it true that you only had a week to record all the tracks to the album?

Dead Rhetoric: Did that put a lot of pressure on you as far as the songwriting and trying to work things out beforehand?

Amott: Not really. We were really badly prepared (laughs). I was feeling a bit stressed out about it before, maybe thinking it wasn’t going to be enough time, or we won’t get everything done that we wanted to get done in those five days. We just talked through the songs, we were all together in the room, on the floor of the studio in a half circle around the drums so we could talk as we were doing the material. We would go for a take- half the album is first takes and the other half is second takes, in one rare case a third take. It was very relaxed and an easy way of recording for us.

Dead Rhetoric: Do you allow for spontaneity from the other Spiritual Beggars members when it comes to recording their parts? It seems like there’s a lot of interplay throughout the new record, especially on songs such as “Diamond Under Pressure” and “Lonely Freedom”.

Amott: Right. I not only allow it, I encourage it and I rely it. I want that to be there, that energy, and I want the others to bring that vibe to each of the songs. Yeah, very much so.

Dead Rhetoric: Is there a balance between using older equipment, tones, etc. and getting things right in the modern digital age for the band?

Amott: Yes, I guess so. I just use whatever sounds good. I do prefer stuff that sounds real and has like warmth and depth to it. If that turns out to be something old or something new recording-wise, it doesn’t matter to me. I trust my ears, I go with what feels and sounds right to my ears.

Dead Rhetoric: Is it hard to produce a more analog-oriented sound in this digital recording world?

Amott: It is. We worked with a fantastic engineer on this album, and a really nice studio as well. We reached that balance. I’m very pleased with how the album sounds- it’s very rich, very warm but it also has a lot of clarity as well. I’m very happy with the album.

Dead Rhetoric: Does song order matter to you these days?

Amott: Yes, totally. I’m old school in that way- I still think of an album as an album, rather than a collection of singles or MP3’s that people are going to listen to in random order. I like to think in terms of a flow, such as a vinyl record – I split up an album into two parts or two acts. So we have the A side and B side. It’s easier for me to create a flow. I think this works out well if you still listen to the album all the way through on a streaming website. You can create a bit of an ebb and flow, some sort of drama in the order.

Dead Rhetoric: And do you feel like you are at a certain advantage in comparison to newer bands who perform proto/retro hard rock/metal given a lot of the members cut their teeth on many 1970’s bands?

Amott: I guess you are right. I don’t see us having a lot in common with those newer, younger bands. I’ve checked out a lot of those bands, what I hear in a lot of it for that scene- a lot of love for the scene and enthusiasm, but maybe not so much musical proficiency or chops.

Dead Rhetoric: What can you tell me about the intriguing, layered and very imaginative cover for the new record?

Amott: It’s made by a very good friend of mine, a Romanian artist (Costin Chioreanu) I’ve worked with a few times. He’s done another cover of ours a few years back when we re-issued the first Spiritual Beggars album and added a bunch of bonus tracks to that. We loved working with him, so we managed to come up with a new, fantastic cover for this album. I love his style, (it’s) an overused word (to describe) but organic, it’s got a very hand-made feeling. It’s a little more psychedelic I guess- we have a history of very colorful covers- so we might as well set the tone and follow through again.

Dead Rhetoric: What do you hope the audience gets out of a Spiritual Beggars live concert? Are the expectations different than what you guys in the band put upon yourselves?

Amott: I have no idea. We are just very selfish lovers, we want to get off on our music and have a blast! (laughs). I think that’s what the show is all about, I think that’s what people want to see. The energy that we put out becomes energy for the crowd and then we feed off that energy that they are putting out as well. I guess people want to see a solid, rocking show with good musicianship and a lot of vibe.

Dead Rhetoric: Do you think the fans have been accepting of ex-Firewind singer Apollo Papathanasio as your current vocalist, now with you for six years?

Amott: Yes, this is his third album with the band, and he’s singing his ass off on the albums and on stage. He leaves it all on stage. If you don’t believe in him going in, you will be a believer going out. He’s a really great singer, and does great justice to the older material that he didn’t sing on.

Dead Rhetoric: Given the long career for Spiritual Beggars, what are some standout moments as far as particular shows, albums, or songs that you connect with?

Amott: Wow. There have been a few different chapters and a lot of cool things that happened early on. We had an album out called Ad Astra and we had a lot of cool opportunities on that album. We supported Iron Maiden for a European tour, stuff like that. It was a big and exciting time, we also supported bands like Queens of the Stone Age and Monster Magnet. We’ve done a lot of fun stuff- we’ve done some amazing concerts in the Far East, Japan, a lot of the shows… we’ve had fantastic moments headlining in small clubs around Europe as well. The albums all have a special place for me. I think because they are all like chapters in a story, they are all important to the band. We’ve had a lot of good stuff, ups and downs as with any band that last twenty years, but mostly good. 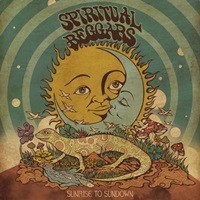