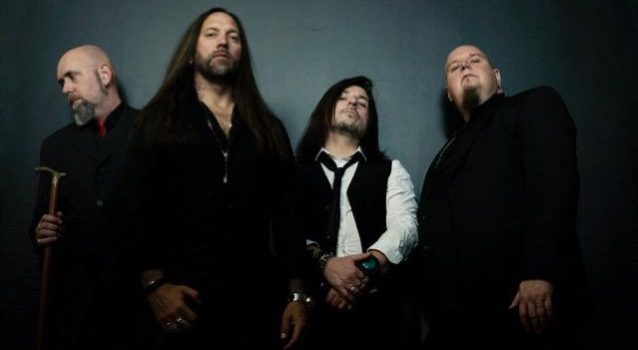 Whatever you think of the supergroup concept, it no longer is unique nor all that enticing, frankly. Advances in technology have made such unions possible to the point where some bands don’t even meet each other, essentially quashing the notion that bands are like “gangs.” Really, they’re just studio creations sometimes. But, to our surprise came Gothenburg’s We Sell the Dead, an outfit equipped with vocalist Apollo Papathanasio (Spiritual Beggars, Firewind) guitarist Niclas Engelin (In Flames), bassist Jonas Slättung (Drömriket) and drummer Gas Lipstick (HIM). Essentially just a straight heavy, melodic metal band, on their Heaven Doesn’t Want You And Hell Is Full, debut, We Sell the Dead finesse the storyline of Jack the Ripper into a seismic, anthemic and thoroughly enjoyable listen, where pure-bred vocal hooks meet an array of melodies.

As evidenced by the two videos found at the end of this interview, We Sell the Dead will be accompanied by a visual presentation unique to themselves; sort of like The Gorillaz, but for metal. A grand concept indeed, which is why we snagged Engelin for a round of questions via email…

Dead Rhetoric: Some supergroups feel like they’re thrown together for the sake of being thrown together. It doesn’t appear that way with We Sell the Dead. Did the band come together organically?

Niclas Engelin: I’m happy you say just that because this is a band of friends and musicians who want to do something different and dare to do so. It was the main priority to do something different coming from us and to turn some heads with our songs. We basically do what we love and we feel so fortunate to not have any boundaries or secret map. We just follow our hearts and try to do the best songs we can do and have tons of fun doing it!

Dead Rhetoric: What kind of expectations are there for the band? Anything beyond just releasing good albums?

Engelin: We would like to take the band in a live environment and try to do something similar to the album’s theme, but we have to find out how to do it first. We are making our first appearance at our release February 23 in Gothenburg and we will just go from there. We have some ideas how to do this. We have already mapped some ideas for the next album and I have been writing some epic and big stuff lately which the guys are putting their magic to as we speak, so we are in the flow!

Dead Rhetoric: How did the songwriting go for the debut? Were these ideas new, or, were they sitting around for a while?

Engelin: I just sat in my man cave/studio at home and tried to challenge myself by writing slow and epic music that would be interesting to hear after six minutes. The challenge is to keep it hooky and have strong choruses that make people still want to hear more. Then, I played Jonas some songs and he just jumped right into the lyrics and vocal melodies and we gelled right away because we’ve known each other since childhood. So, all the ideas were new to me and I just went with the flow, which was really inspiring to say the least.

Dead Rhetoric: Furthermore, We Sell the Dead doesn’t sound like any of your other bands. Was that an important element when coming together?

Engelin: Oh yes, then I could give the ideas to my other bands, but I really wanted to something different and paint with bigger colors and take my time before the chorus kicks in. I just love the Tony Martin-era of Black Sabbath and Magnum’s On A Storytellers Night. I always wanted to try to outdo myself by writing that kind of music with my own way of writing, of course.

Dead Rhetoric: Where did the idea to blend multimedia, visuals, and metal together come from? Is there any precedent?

Engelin: Me and Jonas met up with the talented Dan Lind who’s an animator. He was really into doing something to each song on the album and make a storyboard which goes into a full-length movie when you put all the songs together. That´s what Jonas and Dan did with the whole concept of Jack the Ripper in Gothenburg.

Dead Rhetoric: What kind of possibilities do you foresee with the Jack the Ripper storyline?

Engelin: When we sat down to write the story to the music, Dan had the vibe of Jack the Ripper but move the whole era to Gothenburg during the same time period, so he got hold of the city map of Gothenburg the same period and started working on the animation to the movie which he and Jonas had brainstormed together. But there’s more to the story than Jack the Ripper, but I don’t want to give it away that easy. You have to see the whole movie.

Dead Rhetoric: As for the songs, they are memorable and rather hook-laden; everything you could really want. Were there any criteria when putting the songs together?

Engelin: Yes, to keep it hooky even though the tempo is so slow and the songs are quite long. That’s the key, I think, to take the time for a build-up of a song and then have a big/epic chorus which is the grand finale! I tend to not think too much when I make a song, just go with what your gut/heart tells you and stick to the first idea with some modification of course and have fun!

Dead Rhetoric: Are live shows in the band’s future?

Engelin: Yes, we really want to play live and show the band in that environment. It would be another challenge to keep it interesting throughout a whole gig!

Engelin: I will record the next In Flames album and do some shows with We Sell the Dead and, of course, follow my buddies in Engel with their new album Abandon All Hope.