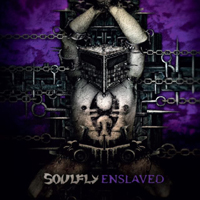 How convenient is that most people have totally forgotten about the time when Max Cavalera had two turntables and a microphone, and that lame-o from Limp Bizkit rapping about “clowns.” Those were some seriously dark days for the “real” metal crowd, especially after all Max and the Seps had done for metal…hearing Soulfly’s self-titled debut and subsequent 2000 Primitive were utterly cringe-worthy. Miraculously, over the course of a decade, Max has grown quite adept at tapping back into his metal roots, with Enslaved picking up where Soulfly left off with 2010’s Omen. 1998 seems like such an afterthought now…

The addition of former Borknagar/Malevolent Creation drummer David Kinkade has certainly added some extremity to Max’s ideas. Kinkade’s death metal background lends itself quite well to the tried-and-true riff formations Max pops out (read: he’s still beating chunky riffs to death), and on cuts like lead single “World Scum” and “Legions,” one can appreciate that Max hasn’t forgotten his extreme metal roots…bloody roots. (Had to throw that in there)

As expected, the choruses are light and predictable, with Max yet again, shouting the song title on repeat (see: “Intervention,” “Gladiator,” and “Treachery”). Still, the seismic groove thrown down on “American Steel” and Beneath the Remains-like tempo of the aforementioned “Treachery” are vicious slabs of jungle metal, and are furthered aided by the always-excellent guitar dressings from lead axeman Marc Rizzo.

People have uttered this time and time again, but albums like Enslaved and Omen, as well as the recent works of Cavalera Conspiracy all but negate the need for a full-fledged Sepultura reunion. And while the Seps continue to churn out respectable, but hardly world-beating albums, Max has been putting out his most pissed-off material since…his glory Sepultura days. To quote Machine Head: The more things change, the more they stay the same.