Soilwork – Live in the Heart of Helsinki (Nuclear Blast) 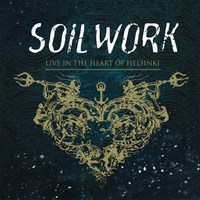 It only took nine albums, but Soilwork has finally released a live album. While they certainly could have pulled this off years ago, it couldn’t have come at a better time. Coming off of their fantastic double album, The Living Infinite, a certain high water mark for the band, there’s plenty of content that they band could choose to incorporate in the live venue.

There is a lot of material here, over an hour and forty minutes to be exact. The fans in Helsinki were given quite a treat with such an extended set from the band (again, a perk of holding off for so long before indulging into the live format). One of the strongest points of Live in the Heart of Helsinki is that of its setlist. Sure, most of these tracks are live staples for the band (or will be in regards to The Living Infinite material) but they are finally captured for fans to who haven’t caught the band live. “Follow the Hollow,” “Nerve,” “Stabbing the Drama,” and “Rejection Role” pair nicely with fresh cuts such as “This Momentary Bliss” and “Rise Above the Sentiment.” Not to mention of the band’s stronger tracks in recent memory, “Spectrum of Eternity.”

One has to hand it to Soilwork for not completely ignoring their beginnings for this live release as well. While much of the album is relegated to the usual suspects and new tracks, the band digs deep for a few tracks. “Bastard Chain” and “Like the Average Stalker” represent A Predator’s Portrait with “The Chainheart Machine” and “Sadistic Lullaby” rounding things out from their first two albums. Could there have been more? Sure, but after seeing the band play an older track like “Possessing the Angels” to little fanfare, it’s an understandable move.

With a solid setlist, great sound production, as well as making it feel like a live album by keeping some of Speed’s banter in the mix, it’s hard to knock this one. Particularly for long-time fans who have been awaiting a live release. If the video quality matches everything coming through the speakers, this one’s a definite keeper.