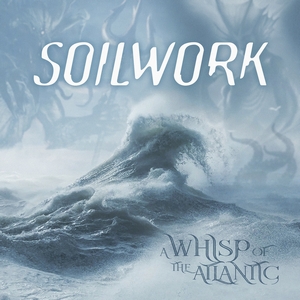 It seems that Soilwork has been releasing a song or two here and there throughout 2020, which culminates in the release of this 5-song EP, A Whisp of the Atlantic. Though tough to really label it as such, when it sits at 36-minutes in length. But it includes the previously released ‘Feverish Trinity’ as well as two new tracks, with the title track being the longest Soilwork song to date (16.5 minutes to be exact).

If the 2010s saw one thing from Soilwork, it was embracing their melancholic side while still delivering some exhilarating choruses and driving energy. It’s a formula that they’ve completely mastered with their last two full-lengths, and those rewards are still being tapped into with this EP. The mammoth-sized title track is nothing short of impressive. It has all of the usual Soilwork hallmarks, from a sense of longing as it opens up, solid mid-tempo grooves, moments of frantic riffing, and an effective balance of clean/harsh vocals from Bjorn Strid. But there’s some more progressive touches as well to utilize the runtime, from some almost doomy/sludgy riffs to a jazzy break that uses some trumpet and rather playful keyboards. There’s a taste of Night Flight Orchestra creeping in in these moments (in a purely good way) and there’s an excellent feeling of buildup and release in that same fashion that TNFO captures on their longer songs. There’s a lot to take in and celebrate with just this track, and you will reap some benefits with each new listen.

The remainder of the EP is the ‘Feverish Trinity’ and brand new cut “The Nothingness and the Devil.” The trinity sits just as strongly as the individual releases throughout the year but it’s nice to hear them quickly back to back, with the rousing “Desperado” being the choice cut with its focus on frenetic speed and melodies that dives into a soaring yet energetic chorus. It’s sure to be a live favorite. “The Nothingness and the Devil” strikes a similar chord with its driving momentum and super-catchy riffing, but gives the release a proper conclusion with a gentle fading out that features a very memorable guitar lead that is basking in that same melancholic spirit that opens the EP.

There’s a rich and exciting depth to A Whisp of the Atlantic. Soilwork is continuing to cultivate a melancholic side that pairs extremely nicely to their more aggressive tendencies and the title track alone makes this one worth a purchase for even casual fans. Add in another four excellent tracks that add to the same philosophical ponderings and you have a Soilwork album that can deliver an immediate hook, but keep you thinking (and returning to it) long after that initial spark fades.