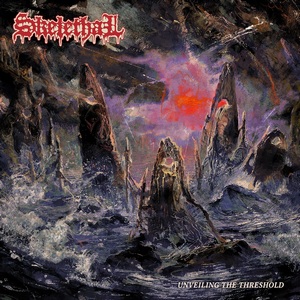 Last we checked in one Skelethal was with their first full-length back in 2017, Of the Depths. It was your standard SweDeath album, even if it did go a bit longer than necessary. Since then, the band has become a 4-piece (from initially a 2-piece), and Unveiling the Threshold hits most of the same marks as their debut with a few minor tweaks.

The glowing positive compared to the debut is that it’s almost a full 10-minutes shorter. To this scribe, death metal, particularly old school-inspired, should be a get-in and get-out affair. Overwise it outlasts its welcome. It should be a biting attack of big, crunchy riffs, and that’s exactly what Unveiling the Threshold does. It doesn’t deviate in the slightest from what many of the denizens of the genre are currently putting out there, but it has all of the ferocity and aggression you need to get some enjoyment out of it. A focus on mid-tempo to faster upticks does the band well in maintaining that surge of adrenaline, and some well-timed dips into slower or more melodic territory (see “Adorned with the Black Vetebra”) are effective in changing up the flow for the better. Of course, frenzied solos and blitzkrieg riffing has a large place and the band frequently flexes those muscles with pleasure (see the frantic and groovy “Cave Dwellers”).

A step up from their debut in terms of songwriting tightness, Unveiling the Threshold revels in old school death metal charm. Whether it adds to the genre in a new way isn’t really necessary but those looking for some more of this material (of which many eat this stuff up), it’ll provide some momentary fun for sure. 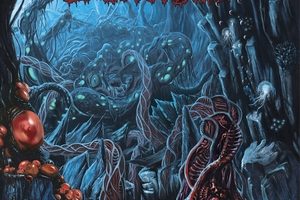