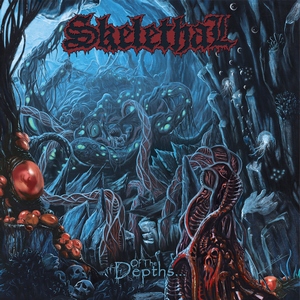 Does a week go by without more old school HM-2 inspired madness hitting the streets? It may even be a shorter interval at this point. That being said, Skelethal may be French in their nationality, but their spirit is certainly sitting in Stockholm circa the early ‘90s. But as alluded to already, they are hardly the first band to feel a kindred relation to said era.

Of the Depths is the band’s first attempt at a full album following a number of EPs and shorter appearances. That being said, this does feel like the type of material that would benefit more from an EP-length release, as the band doesn’t spend as much time going into slower tempos as others in this style tend to do. While that does give them a more aggressive edge, and the melodic inclination within the riffs (and some leads of course) isn’t enough over the course of 46-minutes to keep the album in a higher esteem. If you solely check out the ripping opener, “Sons of Zann,” you’ll be sucked in for sure. The gritty HM-2 tone was completely nailed for this album, and the band going straight for the throat only helps to make it that much more impressive. But unfortunately what seems to happen over the course of the entire album is that it becomes far too familiar, to the point where the occasional glowing riff isn’t strong enough to keep the attention there (see “Glimpse of the Great Purpose” or “Pantheon of the Abyss” for some particularly good ones). In fact, some of the songs just feel utterly forgettable in their one-dimensionality, such as the quick in-and-outs of “Catharsis” and “Soon to be Dead.” That is ultimately what damages Of the Depths.

In the super-crowded space of old school Swedish death metal, any slight misstep means that there are a plethora of other bands willing to step up and take your place. In the case of Skelethal, there’s a lot that they do right (tone, aggression), but it’s not tempered to the point where it can hold up a 46-minute release. Perhaps we’ll see a step up for round two. 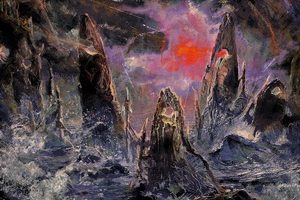