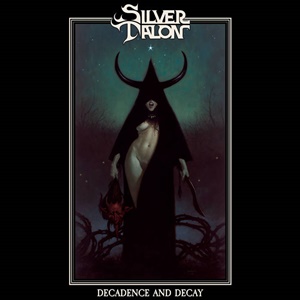 Garnering acclaim for their 2018 Becoming a Demon debut EP (this scribe was definitely impressed), Silver Talon signed with M-Theory Audio and unleashes their first full-length for Decadence and Decay. As a US power metal band, the sextet features a three-guitar assault that allows the group to cover massive ground in expressing nuances of neoclassical/shred, thrash, and extreme elements beyond the expected heavy rhythms and melodic mechanics inherent for the genre. Elevating more key earworms on all sides makes these eight songs stronger for long-term impact, while also stretching the musicianship for those who want a bit more meat on the bones so to speak.

An immediate difference maker would be the fierce abilities and soaring upper echelon range of singer Wyatt Howell. Most won’t bat an eye at placing his screams, his intensity, and emotional magnitude conveyed in killer performances from “Resistance 2029” and “Divine Fury” to draw comparisons for greats like the much-missed Midnight of Crimson Glory, Warrel Dane, or James Rivera. Acoustic guitar embellishment appears in “Next to the Sun” as well as “Touch the Void” – not as aural breathers but actually hand in hand with the electric proceedings, showcasing the mastery for incorporating dynamic textures of the neoclassical variety against some progressive/power runs. Silver Talon take reference from Nevermore, Queensrÿche, Fates Warning, Savatage, and Destiny’s End – putting their own modern spin on things with occasional speed/blast measures, staccato-like heaviness, or harmonization mannerisms that may come from more of a Teutonic or Scandiavian outlook than necessarily American driven. You can tell that each song was placed under a critical lens – making sure the drums, bass, guitars, and vocals are cohesive while exciting and entertaining, leaving no passage dragging in that redundancy or sameness that can happen from time to time. Favorites vary by the way – “Deceiver, I Am” a powerhouse opener featuring a solid mid-tempo template that branches off with sinister guitar interplay and a killer rhythm section spotlight break and the already mentioned “Divine Fury” sure to gain some appeal to those who love a bit of extremity/technicality in their power metal.

Silver Talon deserves all the positive accolades for their output to date. Those who love the darker side of American power metal with killer hooks, melodies, harmonies and a bit of solid, propulsive musicianship need Decadence and Decay as a permanent fixture in your collection. 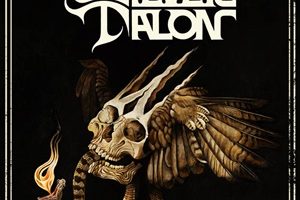