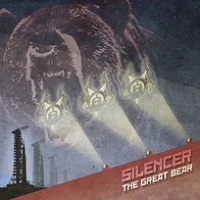 Concept albums can be a mixed bag sometimes. I guess it all depends on the theme and or subject matter to truly make a conceptual piece work as a whole. It worked for Rush on 2112, Iron Maiden’s Seventh Son of a Seventh Son, as did Operation: Mindcrime for Queensryche, but will it work for Silencer? That is the question to ponder here as the Denver based thrashers are set to release The Great Bear as its third release this coming September.

I’ve had the chance to spin this disc a few times and I must say I found this to be a complete overhaul from the extreme noise I am accustomed to hearing. Previous releases Death of Awe and Divisions were steeped in the deathly thrash ethos of crushing sounds and demonic attitude that perked my ears immensely. What I got on this new release was a bit more rock accompanied by big choruses and hooks and certainly a throwback to the 70’s and 80’s metal scene.

Conceptually though, the band examines the US-Soviet space race of the 1950’s/1960s and filters it through a more introspective and somewhat fictional account. Surely it’s an alternative history that is explored lyrically, given how it is suggested that the Russians one up the American’s moon landing mission by going further into space. It’s definitely more thematic than prior releases and I found Rush’s 2112 serving as a large influence on this album. So how does this new sound work on this release? In large part, many of the songs are straightforward but still remain heavy. They obviously made the decision to return to their metal roots and it shows in songs like “Great Bear,” “Insignia” and “The Roar.” Melodic singing is also prevalent throughout the disc, so vocalist Chad Armstrong does an about turn from the raspy death metal tones found on Divisions and stuns the listener with a clean

approach. It took a few spins to appreciate his turn here, but it has finally won me over.

Ultimately, The Great Bear is an interesting attempt at a concept record. Gone are the angry vocals and pummeling rhythms, only to be replaced by a more introspective tone weaved throughout the 10 tracks. I rather liked the approach, especially since it brought to mind some great concept albums from bands like Rush and Iron Maiden. Perhaps this sort of progression will implant the band into similar sounds on future releases, but I guess only time will tell. In the meantime, enjoy this thought provoking release and prepare for the journey into the Russian perspective.